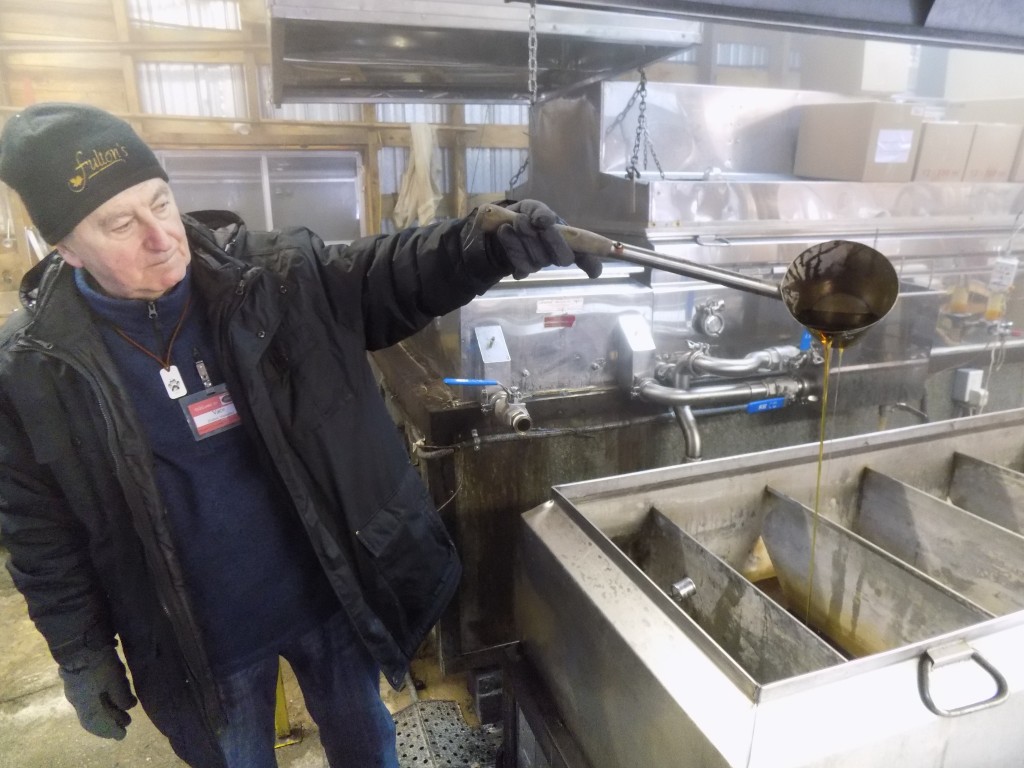 Vace, a Fulton’s Pancake House and Sugar Bush employee, displays hot sap that is in the finishing pans where it becomes maple syrup. Photo: James Morgan

The Ontario Maple Syrup Producers Association (OMSPA) sets aside the first weekend of every April as Maple Weekend. Sugar bushes across the province hold open houses to show how maple syrup and maple sugar are made. I took a drive west of Ottawa into Lanark County, the self-proclaimed “Maple Syrup Capital of Ontario” on Saturday to see how Maple Weekend was going and find out about the methods used to make maple syrup. 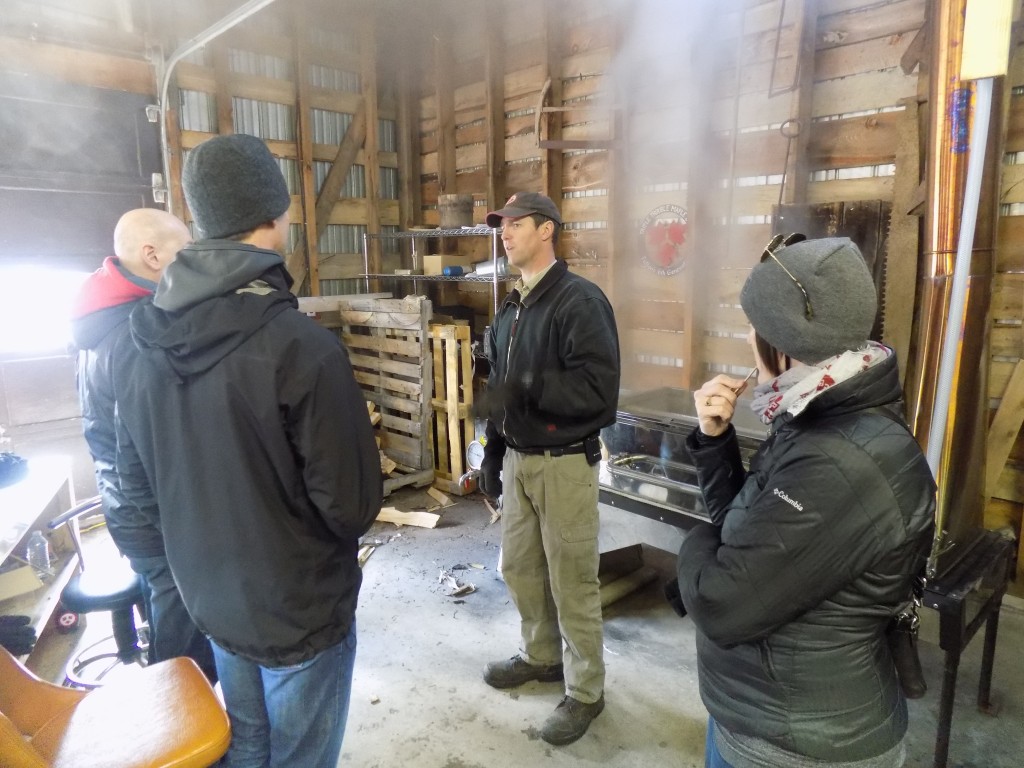 My first stop was Fulton’s Pancake House, back in the woods on the appropriately named Sugar Bush Road near Pakenham. Maple syrup is in the bloodstream of the owners. The Fulton family first settled the 400-acre farm in the early 1840s when they arrived from Scotland. Today, it’s owned by Shirley Deugo (nee Fulton) and her son Scott. His children help during syrup season and are the sixth generation of Fulton descendants. In the late 1960s, Fulton’s modernized and became a commercial producer. Plastic lines through the forest replaced steel sap buckets, and the pancake house and retail store opened. Today, vacuum pumps help get the sap through the 10 kilometers/19 miles of lines to the evaporators. 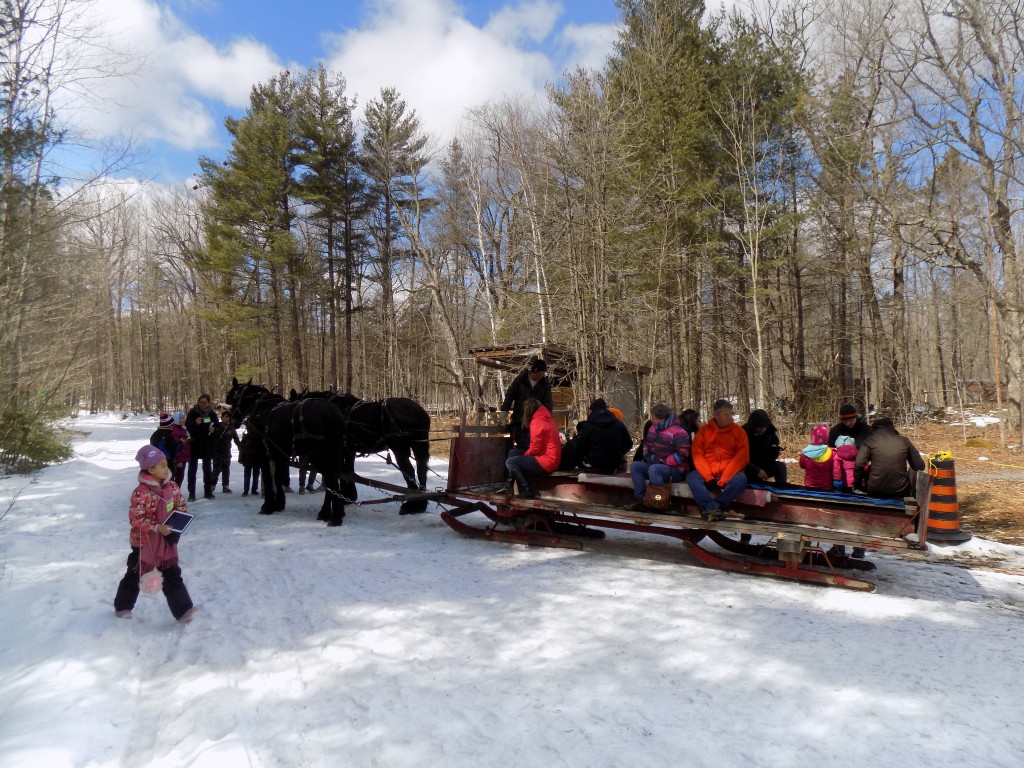 There was still enough snow in the woods for horse-drawn sleigh rides at Fulton’s on Maple Weekend. Photo: James Morgan

“Not bad actually,” is how Scott Deugo described the 2018 maple syrup season. With few exceptions, there has been a steady month of the right conditions; temperatures above freezing during the day, and below freezing at night. Deugo said that based on the long-range weather forecast, the season could last another two weeks. He said that the season ends when buds start to appear on the maple trees, and that it usually coincides with when the “spring peeper” frogs start making noise.

Sugar bushes demonstrate the historic ways of making maple syrup. At Fulton’s, they demonstrate how the Indigenous people boiled sap in dugout logs positioned over hot stones. Wood carver Chad Clifford took a break from carving a canoe paddle and showed me how a spile—the tap that is inserted into the tree to draw out the sap, can be made from a piece of green Staghorn Sumac wood. 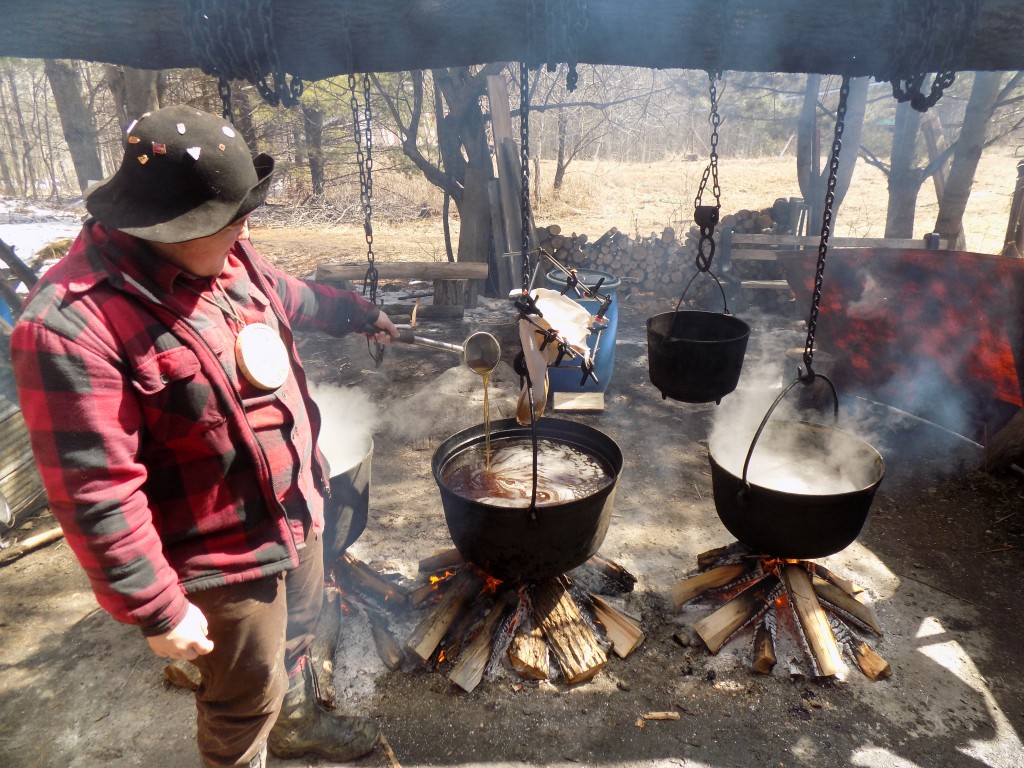 Nathan DePater, one of the four Kettle Boys, shows how maple sugar was made over 200 years ago. Photo: James Morgan

At Fortune Farms, another sugar bush a few miles away, I saw two other historic methods of sugaring off at work. The Fortune family operates the main modern sugar house, but further back in the woods, volunteers show up on weekends to do things a bit more rustically.  The Kettle Boys boil sap in iron kettles over open fires. One of them, Nathan DePater said the method dates back to 1760. Farmers using kettles usually boiled the sap right to 95% sugar that could be hardened and put to use in the kitchen so they could avoid the cost of refined sugar from stores. Maple syrup is 66% sugar.

At the edge of the woods, the Shanty Men, Eric and Ed, were boiling sap in the farm’s original sugar house that was built in 1945. It was warm in the evaporator room, even though I could see the light coming in between the boards on the walls. I glanced through a doorway and saw an old cookstove in the room where previous generations of Shanty Men moved right in to eat and sleep during syrup season. The Kettle Boys and Shanty Men products are for their own personal use and are not for sale due to food production regulations. 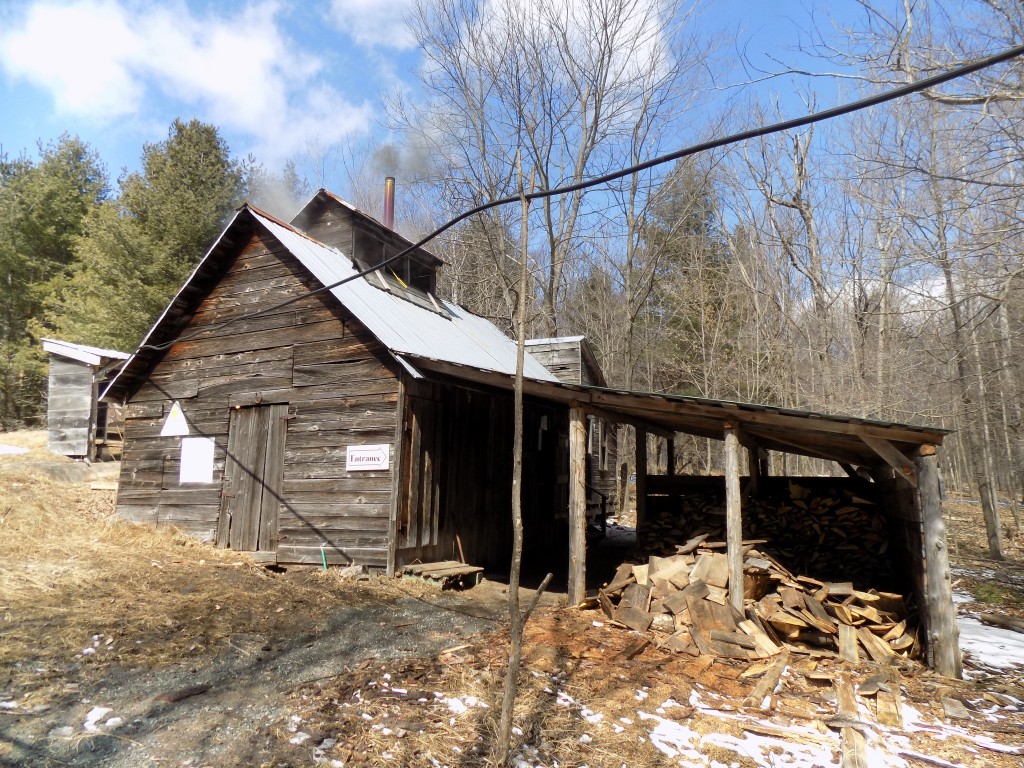 Back at the main Fortune sugar house, no boiling was happening, but I had a look at the giant oil-fired evaporator with electronic controls that is used there. Fulton’s have a similar evaporator fueled by pellets. Both places put the sap through a reverse osmosis process which takes most of the water out of it before sending it into the big stainless-steel evaporators to speed up the process. Fulton’s and the Shanty Men were both using smaller wood-fired evaporators on Saturday to demonstrate. 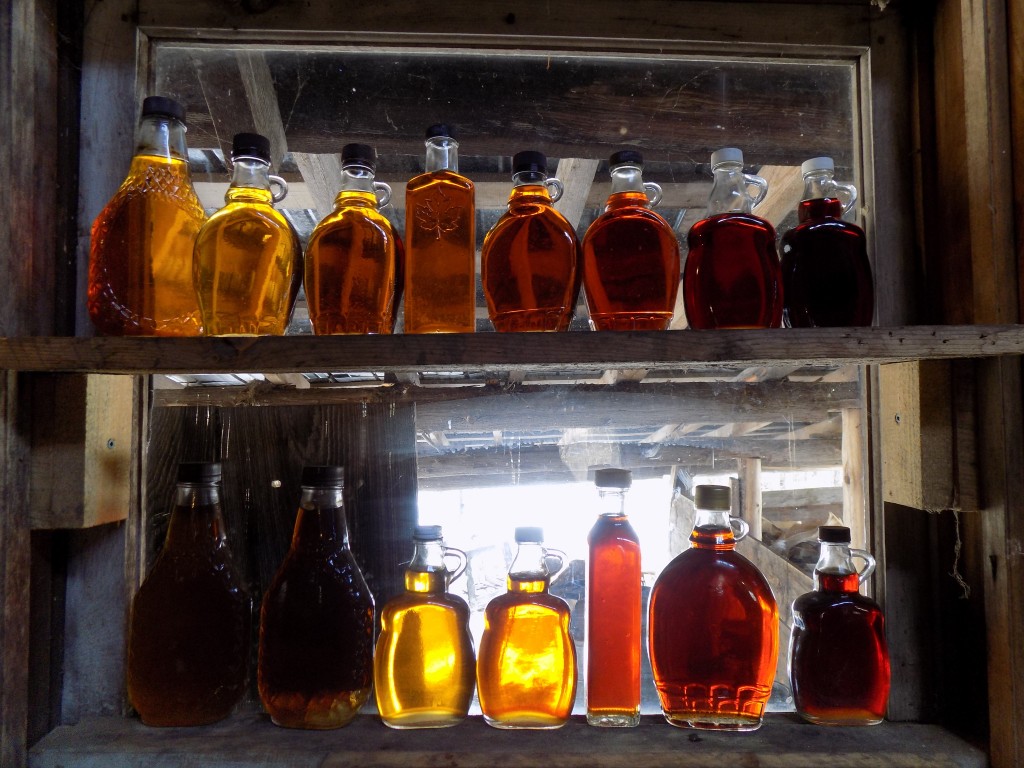 Maple syrup grades in Canada are now standardized into four categories and match the grading system used in other big maple syrup producing places like Vermont and New York. The grades are determined by the color of the syrup and the percentage of light that can pass through it. The lightest syrup is produced early in the season, and the darkest late in the season.

I personally thought it was all pretty good, based on the samples I had on Saturday. Those included a maple sugar candy from Fulton’s, small paper cups of hot syrup from the Shanty Men and Kettle Boys, and an amazing maple butter tart from the shop at Fortune Farms.  I drove out of Lanark County high on sugar.