This spring Canton became a sort of crucible testing the concept of “food deserts”. (That’s “desert” as in dry, not “dessert” as in delicious!)

Food deserts are a hot topic in the worlds of obesity/nutrition and the locavore movement.   Basically, millions of Americans in low income urban or rural communities have to travel a long way to find healthy food, especially plentiful fruits and vegetables.  More often than not, they don’t.  Instead, they eat easier to find, less healthy processed foods.

Canton’s supermarket was closed for two months, and the community became a food desert.  (A quick shout-out here to Nature’s Storehouse, a small grocery/health food store that offers fresh produce and healthy food, that stood as the exception.  (full disclosure – my wife works there.))

Interviewing folks at the new Price Chopper, which opened Monday, everyone I talked to mentioned how hard it was to get the fresh fruits and vegetables they wanted.  People like Bob and Candace Cowser. 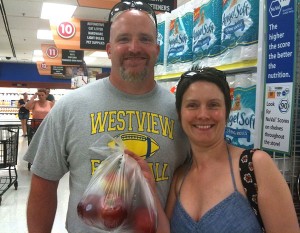 My experience was similar to the Cowsers.  We ate out more.  We dug deeper into the pantry’s canned foods and the freezer’s frozen foods.  It was frustrating.  But we know how to cook.  And, as I say above, my wife works at a small grocery.

The reality is it’s an effort for people in rural areas to get produce most of the year (summer’s the easiest, when the harvest provides a bounty).  Supermarkets are a long drive away.  Processed foods save trips and, as we’ve noted before, money.

Maps drawn based on research done on food deserts show much all of the North Country to be a rural food desert – even with all the supermarkets open.

But the last two months brought that reality into sharp relief.

Is there any fix to this?  It’s not like you can build supermarkets every ten miles on county routes.  Are rural areas destined to be food deserts except when the harvest comes in?

4 Comments on “Canton’s food desert gets much needed rain”