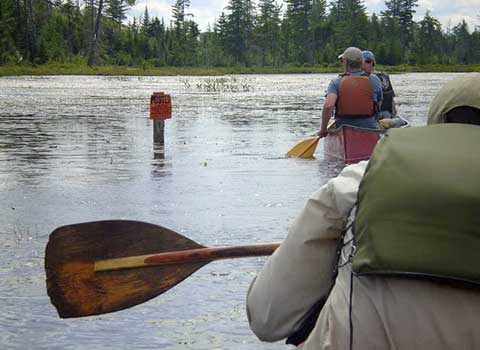 Crossing lines in the Adirondacks. Brian Mann paddles past a No Trespassing sign to report on paddling and property rights in the North Country.

Last week, I did something I very rarely do:  I consciously crossed a visible line in a river and an invisible line in my approach to reporting on the battle over river rights in the Adirondacks.

The owners of a big chunk of private land in the Adirondacks, the Brandreth Park Association, have posted as private two chunks of water, Mud Pond and a stretch of Shingle Shanty Brook.

They’ve strung a cable across the river — that’s the visible line.

Their signs threaten legal action against any canoers and kayakers who paddle through and make use of a short portage trail that connects these remote bodies of water.

The landowners have even rigged automatic cameras to photograph anyone passing through the area without their permission.

A lot of paddlers and independent legal experts think those restrictions and warnings are powerless.

State law, and a landmark 1989 appeals court decision, known as the Adirondack League Club case, seem to indicate that the vast majority of navigable rivers and streams in New York are open to public traffic.

“If…a river is navigable in fact,” found New York’s highest court, “it is considered a public highway, notwithstanding the fact that its banks and bed are in private hands.”

That same decision concluded that “recreational use fits within” the spectrum of recognized and acceptable activities on those rivers.

While still controversial, the decision is seen as definitive even by a lot of people who are deeply uncomfortable with the idea of paddlers crossing through private land.

“I understand [private landowners] desire not to have paddlers on their land,” says Ross Whaley, with the Adirondack Landowners Association.  “However, the law has spoken and [the landowners] may not have a choice.”

Here’s what Whaley said in an interview with NCPR:

“It seems that the case law over time has made it clear that navigable-in-fact streams can be navigated by paddlers.  This stems from English common law, which was the law of the state of New York prior to any legislative law…The courts said that recreational passage is allowed under the common law.”

That view is shared by John McDonald, head of the Ausable Chasm Company and a former attorney for the Adirondack Local Government Review Board, a champion of private property rights in the Park.

“Legally, they do have a right to go through the river,” McDonald says, pointing out that the courts also confirmed the right of paddlers to portage, to scout the river, and to carry boats and equipment across private land.

Some private landowners — including Judson Potter, head of the Brandreth Park Association — disagree passionately with this interpretation.

In a lengthy conversation with NCPR, Potter insisted that the Adirondack League Club decision, when coupled with other New York case law, is far murkier than others believe.

He’s convinced that the unique characteristics of Shingle Shanty Brook should exempt it from the common law access provided on most of New York’s navigable rivers.

“It’s a very important part of my family’s history,” Potter says. “And we very actively and regularly use the area.  We don’t every want to be in a situation where there’s a potential conflict between our family members and members of the public who are going through the area.”

Normally as a journalist I try to play it right down the middle:  I report what both sides say, include as many facts as possible, and let you the audience decide.

But in this case to get at the story accurately, I decided that I had to cross that second line, the invisible one.

I had to decide whether the law gave me (and NCPR) access to Shingle Shanty Brook without first gaining permission from the landowner.

After talking with legal experts and reading the case law carefully, we decided that on balance the issue seems fairly clear:

If a river in New York is navigable and we have a good reason to use it (recreation, journalism, trade, or whatever) we have a right to use it.

That said, it’s always a nervous business when a journalist moves beyond pure neutrality, even in cases like this where the facts seem reasonably plain to most observers.

So what do  you think?

Did NCPR report the facts accurately?  Did we do the right thing by paddling that river — and portaging briefly over private land — to get the story?

Or did we show a bias and trample a landowner’s property rights?

Your comments are welcome below.

103 Comments on “Is it freedom of the rivers or trampled property rights?”