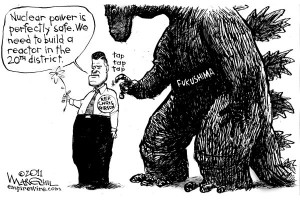 The last couple of months, local politicians from Queensbury to Massena have been calling for a nuclear-powered future, one in which a new power plant located here in the region would boost prosperity.

Freshman Rep. Chris Gibson — who represents the 20th district in the US House — has led the way, making the concept a centerpiece of his first term.

He argues that communities should have the chance to compete for a new plant.

According to the Glens Falls Post-Star, Gibson was scheduled to speak this week to th U.S. Nuclear Infrastructure Roundtable luncheon in Washington DC.

But he’s hardly alone in taking up this banner.

Across the political spectrum, nuclear power boosters have more momentum than at any time since the Three Mile Island disaster three decades ago.

The dodgy part of this new push for nuclear power is that many proponents have been insisting that doubters and skeptics are little more than nattering nabobs of negativism.

When the Glens Falls Post Star condemned the idea of building new nuke plants in our region — insisting that the facilities still aren’t “completely safe” — the paper’s editorial board drew derision and mockery at one of Rep. Gibson’s town hall meetings.

But the truth is that there are still a lot of unanswered questions about the nuclear power industry, many of them highlighted by the unfolding nightmare in Japan.

We’ve been promised that these plants are engineered with layers of safety protocols, state-of-the-art engineering, and back-up systems.  The situation in Japan suggests otherwise.

A half-dozen reactors in that country are now at risk of full-scale meltdown.  We’ve been treated to images of containment buildings dissolving in clouds of smoke and debris.

The crew of one of our US navy ships has now been exposed to at least low levels of radiation.

But Japan’s crisis isn’t the only warning sign.  The Vermont Yankee plant has been plagued with technical and safety problems, including hazardous material leaks, for years.

Scientists have also been raising new questions about the Indian Point nuclear facility near New York City.  This from the Mid Hudson News.

According to an August 2008 paper in the Bulletin of the Seismological Society of America, there are concerns.

“A study by a group of prominent seismologists suggests that a pattern of subtle but active faults makes the risk of earthquakes to the New York City area substantially greater than formerly believed,” the US Geological Survey reported.

“Among other things, they say that the controversial Indian Point nuclear power plants, 24 miles north of the city, sit astride the previously unidentified intersection of two active seismic zones.”

“We are going to have to see what happens here — obviously still things are happening — but the bottom line is we do have to free ourselves of independence from foreign oil in the other half of the globe.

Libya showed that. Prices are up, our economy is being hurt by it, or could be hurt by it. So I’m still willing to look at nuclear. As I’ve always said it has to be done safely and carefully.”

Fair enough.  But it’s time for proponents of nuclear power to engage in a more forthright way with critics of the industry.

The truth is that a lot of questions still need to be answered before more plants are built.  And it appears that there are more thorny and challenging questions surfacing every day in Japan.