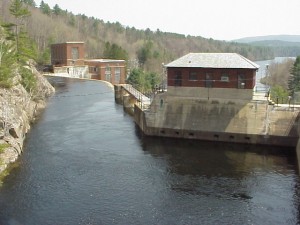 At the height of the spring floods earlier this month, officials with the Hudson River Black River Regulating District issued a warning that their massive dam on the Great Sacandaga Reservoir might be failing.

The announcement triggered a near panic among some residents.  This morning, the Glens Falls Post Star reports on a meeting between District officials and local emergency responders to talk about what happened.

Online and by phone, officials said, alarm about a breach at the dam spread rapidly among residents and was hard to quell.

“We certainly didn’t want to create panic in the street, but we did want to give some level of urgency to our message,” said Paul Lent, director of the Saratoga County Office of Emergency Services. “It’s a really delicate walk.”

Equally alarming, perhaps, was the fact that many residents apparently weren’t notified that there might be a significant problem with the structure, which holds back one of the largest waterbodies in the North Country.

Warren County officials have been criticized for not being more proactive in alerting residents, but they have defended their response by saying the information showed there was little reason for concern.

In fact, the alert was a false alarm, based on erroneous water-level readings.  Pressed to develop a better system for alerting the public about problems, the Regulating District said it lacked the cash to do so.

7 Comments on “Morning Read: What if the Conklingville Dam had failed?”