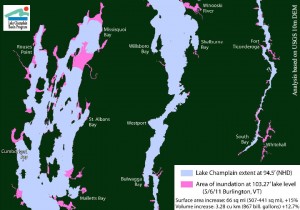 The Burlington Free Press is reporting this morning that Vermont Governor Peter Shumlin thinks that climate change may have already changed life in the Champlain Valley for good.

“We’re concerned about how we get the resources to solve the new reality of higher water levels,” Shumlin said. “Our assumptions about the places we live and recreate have to change. We need to think about how we plan for the next 50 years” of what is likely to be wetter weather.

His comments follow a Washington Post essay published by Vermont’s leading climate change activist Bill McKibben, who argued that global weather crises — from Midwestern tornadoes to “megafloods” — could be triggered by global warming.

“Do we have a bigger problem than $4-a-gallon gasoline?” McKibben asked.

So what do you think?  As hundreds of homeowners along the shore of Lake Champlain hunker down for another month underwater, are we already living in a world significantly altered by carbon pollution?

As always your comments welcome.

33 Comments on “Morning Read 2: Is a flooded Lake Champlain the new normal?”