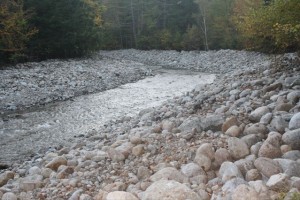 For the first time, an official with the state Department of Environmental Confirmation has acknowledged that post-Irene clean-up efforts have caused damage to Adirondack waterways.

Speaking with the Adirondack Explorer magazine, Chris Amato, the DEC’s assistant commissioner for natural resources, said “there are areas where some of the work that has been done has adversely affected fish habitat.”

According to Amato, the state plans to do restoration and reconstruction work to repair the damage, but he said local officials and clean-up crews weren’t to blame.

“It’s not surprising that when people are working to save lives and property, protecting trout habitat is not their first priority,” he said in an interview with the Explorer.

But now that the emergency is over, he said, DEC will assess the work and come up with a plan to repair damaged habitat. Amato said DEC will employ established stream-restoration techniques to recreate natural features such as gravel beds, pools, riffles, bends, and shoreline vegetation.

“We will re-establish the variety of habitat that naturally occurs in streams,” Amato said.

The impact of dredging, gravel removal and straightening of streams has been increasingly controversial in the weeks following Irene, though some local government officials feel that the issue has been overblown by the media.