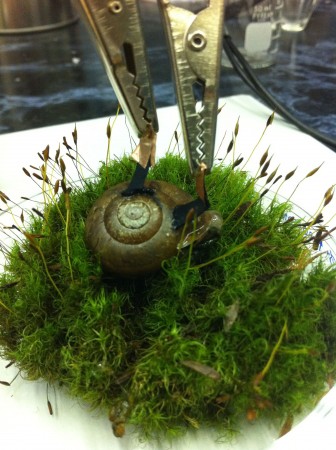 Who needs hydro dams and nuclear power plants!  Pah on those hydrofracking projects!  I say snails are the power source of the future.

Okay – actually this is serious stuff, an effort by Clarkson University to research tiny “biofuel cells” that could eventually power things like implanted medical devices.  This from the Watertown Daily Times.

A team of scientists at Clarkson University has developed technology to turn an ordinary snail into a living, moving battery.

The research was published earlier this month in the Journal of the American Chemical Society with Evgeny Katz, Milton Kerker chaired professor of colloid science at Clarkson, as the lead author.

The technology involves tiny implants, called biofuel cells, charged by chemical reactions in the snail’s blood. Though a snail generates only a tiny amount of electrical charge, the electricity is accumulated in a device called a condenser, which can then power another small device if needed.