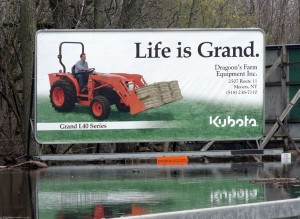 The Burlington Free Press notes that a year ago today the waters of Lake Champlain rose above flood stage, launching a battle for survival that gripped the valley for months.  (The lake didn’t drop below flood stage again until June 19th.)

A near record snow pack in the early spring, followed by an April that became the wettest on record contributed to a large part of the flooding.

During the long lake flood, road crews worked for weeks dumping countless tons of rocks along lakeshore roads to prevent them from eroding in the waves. Camp owners also tried to fortify their property, or watched helplessly as waves battered through camp walls and living spaces.

The lake flooding was astonishing.  I remember time and time again standing in places and just being flabbergasted that the high water had reached places that seemed untouchable.

I snapped the picture above while driving through a neighborhood in Plattsburgh.  The good news is that the recovery has been remarkable.  Drive along the shore these days and businesses have reopened, roads are back in place.

The effort to bounce back has been just as astonishing as the flood itself.