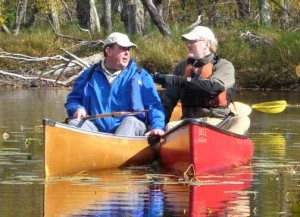 Over the last century and a half, the Adirondack Park has seen a lot of outsized figures shaping its future, everyone from Teddy Roosevelt to Senator Ron Stafford.

But with the Park’s modern structure — the zoning map, the private land use plan, the Adirondack Park Agency — now arrived at a comfortable middle age, there had been a general sense that the era of big, history-making leaders was at an end.

Enter Mike Carr, executive director of the Adirondack Nature Conservancy.  Under his guidance, a once obscure regional green group has moved to buy up and protect vast tracts of timberland once owned by major logging and paper companies.

Another big parcel, nearly 70,000 acres, will now be added to the forever wild forest preserve.

“Mike Carr was the brilliant architect of this plan, which stitched together the protection of a key resource in the Adirondacks, the heart of the Adirondacks,” said John Ernst, a conservationist who owns the Elk Lake property, which neighbors the Finch Pruyn lands, speaking at Sunday’s ceremony.

But the Finch, Pruyn deal, consummated over the weekend by Governor Andrew Cuomo to the tune of $47 million dollars, was only the latest installment in an effort that has literally redrawn the Park’s map, and rewired the debate over the Adirondacks’ future.

By permanently protecting vast acreages of timberland, lakes and shorelines, Carr’s group has gone a long way toward addressing the chief environmental risk that led to the formation of the APA: the vulnerability of the Park’s privately owned timberlands.

In launching the historic Finch Pruyn deal, Carr, who lives in Keene, convinced his organization to bite off a massive $100 loan.

He then led the organization as New York state descended into the Great Recession, and kept the project afloat during the Paterson years when interest in big North Country land deals evaporated.

It was more than risky.  It was an effort which might have looked foolish if the stakes weren’t so high.

Even critics of these land deals — and there are many — have praised Carr for pioneering new ways of talking with community leaders, negotiating contracts that address community needs and provide important assets like snowmobile connector trails.

You might expect a massive preservation effort like this one to spark an equally massive backlash.  Instead, it has co-existed with a new era of detente and dialogue.

Speaking on Sunday, Republican Assemblywoman Teresa Sayward gave the Nature Conservancy an 85% grade for its handling of the Finch Pruyn deal.  Not bad coming from an elected official who would have preferred to see the project shelved.

One curious note in Sunday’s official signing ceremony was the fact that Carr himself didn’t speak, nor was his historic role acknowledged by Governor Cuomo, though two speakers described him as “the architect” of this deal.

It was a peculiar omission, but moments like that likely won’t matter much in the long history of the Park.

A century from now, when people talk about and debate the actions of the big players who shaped what happens inside the blue line in permanent ways, I suspect Carr’s name will be prominent on the list, up there with Bob Marshall and Verplanck Colvin.

Carr’s legacy isn’t complete.  Indeed, he is still shepherding some big projects, one or two of them intensely controversial.

Tupper Lake is opposing his group’s effort to protect the Follensby Pond tract, which many environmentalists see as sacred ground, the place where Ralph Waldo Emerson went to set up his “philosopher’s camp.”

Will Mike Carr redraw that part of the Adirondack map too?  Stay tuned.