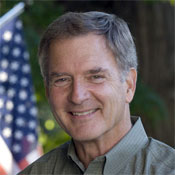 CORRECTION:  Bill Owens did not vote for the Federal stimulus plan backed by Barack Obama in 2008.  He didn’t take office until the next year.  We regret the error.  Owens did later embrace the policy, advocating for stimulus projects in the North Country.

In a blog post yesterday, I copped to the fact that I sort of expected Democrat Bill Owens to lose his race against Republican Matt Doheny.

I called Owens’ campaign “quiet” and “lackluster.”  During the final weeks of the campaign, I was in room after room where the energy and audience support for Doheny seemed bigger and noisier.

When Siena’s second poll of the NY 21 showed that Doheny had closed a big double-digit gap and moved to within a single point of Owens, the three-year incumbent from Plattsburgh, I thought it showed real momentum.

But on election night, Owens was the one who surged past Doheny, picking up big margins in Clinton and St. Lawrence County, which lifted him to victory.

So what happened?  Here are five theories about why Owen prevailed.

1.  Incumbency really matters.  I don’t mean this in a cynical way.  Owens has drawn strong reviews during his first three years for helping constituents with individual problems, while also working hard on big problems, including the aftermath of tropical storm Irene, the Crowne Point Bridge crisis, and the regional economic downturn.  As a consequence, even many elected Republicans have endorsed him or described him as a good partner.  When early polls showed Owens leading by 13%, it was clear that his job performance had built a reservoir of good will.

2.  Owens had the centrist resume.  When Bill Owens first ran for office as a Democrat in 2009, a lot of people thought he was a Republican.  He had a strong record of helping boost economic growth in Clinton County.  After he went to Washington, he was careful to tack hard to the center.  Yes, he voted for Obamacare and later backed the Federal stimulus (which was approved before he took office).  But he also won a strong rating from the NRA and focused a lot of his attention on veterans and farm issues.  This made it harder for Doheny to tag him as a Nancy Pelosi liberal.

3.  Owens is establishment.  Matt Doheny tried to brand himself as the businessman in the race, but Owens has much deeper ties to North Country’s chamber of commerce class.  He’s served for decades on bank boards.  In his own law firm he partnered with legendary North Country state Senator Ron Stafford, a Republican.  And Owens himself has a North Country persona — less brash, less noisy, less young, less fast money — that’s much more in synch with the business community here.

4.  Owens campaign wasn’t that lackluster.  I stick by my argument that Doheny out-hustled Owens.  And the barrage of third-party money from conservatives was extraordinary.  But Owens built a big war chest and spent a ton of dough on campaign ads, including a couple that were highly effective.  He also quietly mobilized union groups to help with his get out the vote effort.  In the final days, he was supported by robo-calls from Bill Clinton and a big influx of spending from Democrats in Washington.

5. Owens faced a flawed candidate in a Democrat-friendly election.  In the past I’ve described Owens as the luckiest politician in North Country history.  This time, he won straight-up, without all the stars aligning in his favor.  But the simple truth is that Republicans are still suffering under a very damaged brand right now and tensions within the conservative movement are making it very tough indeed for even the best GOP candidates to prevail.  For all his good qualities, Doheny wasn’t strong or appealing enough to overcome those hurdles.

The bottom line is that Bill Owens has now emerged as the most influential and important politician in the North Country, and he no longer has an asterisk by his name.

If someone had suggested a half-decade ago that Owens’ political resume would grow to rival that of Stafford, his one-time Plattsburgh law partner, I would have told them that they were crazy.

But as Owens pivots from the campaign to tackle monumental issues including the farm bill and the fiscal cliff that threatens Fort Drum, he will be influencing decisions that will shape our region for decades to come.

9 Comments on “NY21: What in the world happened to Bill Owens?”