Every few years news stories circulate about how advanced the Netherlands is at preventing devastating flooding.

Sometimes that’s because of current events like Katrina, or Sandy. Other times the tone of coverage is simple awe at stupendous feats of human engineering and national will.

Either way, it’s a fascinating subject with centuries of experience behind all that expertise. 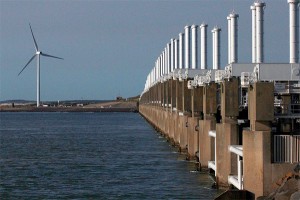 Flood control is serious business in the Netherlands, as the 9-km long Eastern Scheldt storm surge barrier demonstrates. A placque on the artificial island anchoring one end bears the message (translated) “Here the tide is ruled, by the wind, the moon and us (the Dutch).” Photo: Mark Fletcher, CC some rights reserved

The Netherlands learned old tricks – and keeps inventing new ones – out of sheer necessity. Roughly half of that coastal country’s land lies below sea level, and two-thirds of it would be unusable without flood-control measures.

It’s a small country with major rivers that drain into the turbulent North Sea. So lives, property and prosperity are at stake in no uncertain terms. Making sure water stays where it’s wanted takes committed planning, shared sacrifice and mountains of money. The high level of expertise developed in the Netherlands has become an exportable resource for which one can expect increasing demand.

David Wolman wrote about this for Wired Magazine back in Dec 2008, in a useful article with excellent photos and graphics. (Really, it’s worth a click and a read.)

Referencing current interest in Dutch expertise in this Nov 14th article by Andrew Higgins, the New York Times cautions that:

There are a lot of significant reasons the Dutch example may not transplant well.

For starters, unlike the Netherlands, the U.S. as a nation has yet to decide if global warming is for real.

Assuming it is, there would be further quarrels about the role of government in addressing the issue. The turf battles between government and the private sector, federal authority verses state or local control – how would all that get sorted out?

Betond politics, there would be questions of scale and affordability. The U.S. is w-a-y bigger than the Netherlands. (Just Vermont and New Hampshire combined are bigger.) What works there might have to be customized for each coast and major city on North America. At a staggering cost. (While this post is being framed in U.S. terms, most of the same issues apply to Canada as well.)

The Dutch have done the math. That nation has decided the situation demands massive spending to prevent massive disaster. A DeltaComittee was established, which identified proactive strategies for specific regions, meant to curtail flood and storm threats – for the next 200 years.

According to the Wired article, the Dutch have even faced the harsh reality that some areas warrant more spending and stronger protection than others.

Given the election-cycle and “what’s-in-it-for-my-district” thinking so dominent here, the Dutch ability to plan and commit is amazing. And yet, on a geologic scale, 200 years is a blink of an eye. Not to mention the worrisome fact predictions about melting ice caps and such have mostly underestimated the actual speed of current changes. But it’s a serious effort, anyway.

Serious as that is, is it enough? Let’s say the Dutch nail this, that everything they build works just as designed. Well, that’ll only buy relative flood safety for two centuries. If surprising change is the new normal, the whole superhuman effort may have to be continued or redone again and again – an expense that never relents.

Just imagine the “pay now or pay later” arguments. Or the possibility that the really big countries have a cheaper choice: falling back inland as sea levels rise.

On the other hand, thinking ahead, applying engineered solutions and/or working with natural forces is how the Netherlands became a prosperous nation in the first place.

In contrast, North America has sort of rested on its laurels of plenty, without needing that level of pro-active co-ordination in managing natural security on a country-wide basis.

There’s little consensus here on what lies ahead, in terms of weather events and climate change.

When you look at how a country like the Netherlands tries to deal with this murky reality, does their approach seem wise? Practical?

Or is it irrelevant to our lives – considering the size of the U.S. and deep political disagreement about climate issues?

8 Comments on “What about “going Dutch” on flood protection?”