It’s a question worth pondering. In ancient Rome the rabble may have wished for more bread and better circuses. Londoners across many centuries might have asked for less fog. Popular destinations probably wish they could have visitor revenue – without the silly tourists that bring it in. Modern city dwellers everywhere long for less traffic.

I live in a lesser-known place: Ottawa. Well, in a rural corner of it anyway. Which suits me fine. If I need a shot of city life, that’s just 25 minutes away.

For most of my life, I’d have been hard-pressed to locate Ottawa on a map. Now I can report first-hand that Ottawa is justly known for being relatively clean and safe with excellent recreation resources.

Yes, undoubtably, it’s cold here for nearly half the year. But snow is pretty and we get a lot of cheerful sunshine. (Winter is actually one of the better seasons for outdoor recreation in these parts, if you like to get out and ski, skate or snowshoe.)

One the whole, it’s a nice place to raise a family. In fact, for three years running, MoneySense Magazine has ranked Ottawa as the best place to live in Canada.

Of course ranking cities is largely subjective. Just ask the wetsuit-clad doctor I met in Nova Scotia. Still high on his excellent surf session, he told me he’d lived in many, many places and – beyond a doubt – “Halifax is Canada’s best-kept secret.” (He did allow that the surfing was better in Hawaii.)

In good times, Canada’s federal capital boasted a wealth of government jobs that insulated against unemployment or a bumps in the real estate market. In the late 90’s Ottawa began to bill itself as “Silicon Valley North” with a booming high tech sector.

My husband is in high tech and that’s what brought us to Ottawa from Honolulu. A good public school system and comparatively-low university tuition were additional attractions. The opportunity to experience and explore Canada and the U.S. mainland was also tremendously attractive. Although we miss essential elements of Hawaii, we haven’t been disappointed.

More recently, high tech has been less robust. Thousands of civil servants are getting pink slips because of efforts to slim the federal work force. It’s hard to be completely immune to the waxing and waning of economic forces. But those two realms, along with services, tourism – and yes, plain old agriculture – still float the economy here. (As a municipality, Ottawa is huge. Its boundaries encompass a significant percentage of active farmland.)

Ottawa also has a reputation for being…well, I’ll just say it: dull.  It’s known as a place that largely shuts down at night. Where concert goers may be loathe to stand up, cut loose and dance – but happy to fight about lawn chairs.

Ottawa is not as chic as Montreal. The dining is more dynamic in Vancouver and there’s probably far more entrepreneurial energy in Calgary. And who can forget that much of Canada enjoys despising Ottawa as the place where hard-earned tax dollars go to die? 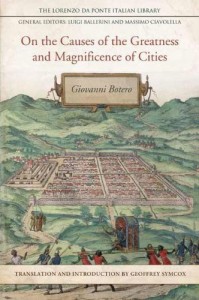 As mentioned, cities have been measured and have measured themselves for a long time. One of the first writers credited with assessing cities as functional units was an Italian named Giovanni Botero.

As Tom Spears reports in the Ottawa Citizen, in 1588 Botero wrote a book  “On the Causes of the Greatness and Magnificence of Cities”. And what makes cities work?

Botero doesn’t care much about fortresses and armies; he looks for trade, transportation routes, a middle class, contact with foreign states, universities, and growth, as well an an effective ruler. Not so different from our day.

Published in English for the first time, by the University of Toronto Press (translated and introduced by Geoffrey W. Symcox) the book is described thusly:

The first treatise ever written on the sociology of cities, On the Causes of the Greatness and Magnificence of Cities (1588) marked a radical departure from previous literature on urban centres. It provided a revolutionary analysis of how cities function, and of the political, economic, demographic and geographic factors that cause their growth and decline. Noteworthy too is Botero’s strikingly original use of sources in his analysis: moving beyond familiar classical and biblical references, he drew groundbreaking insights from reports by travelers and missionaries about cities in the non-European world, especially in China.

Though seminally important to the history of urban studies, On the Causes of the Greatness and Magnificence of Cities has not been available in a modern translation until now. This edition of the treatise – which includes an introduction by Geoffrey W. Symcox on the intellectual context within which it was conceived – is a must-read for anyone interested in the life of cities both historical and contemporary.

1588 was a long time ago but some things don’t change much at all.

How does your city stack up? What does it do well, and what might be missing?

And if you have some tips on how Ottawa can be even more livable, send ’em in!

3 Comments on “Cities then and now: what makes them great?”