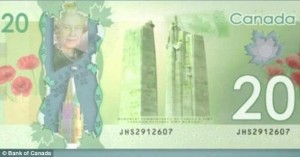 The new design for the $20 bill features the Vimy Memorial, which features some semi-clad female sculptural details, which might (under a powerful magnifier) arouse prurient interest.

The roll-out of polymer – or “plastic” – money continues in Canada.

This Bank of Canada video explains the choice of imagery on the new $20 and the various enhanced security features on polymer notes.

What follows is sort of a recitation of money follies. Because when you change money – or ask people what they see in images – odd things happen.

Designs of the new bills were trotted past focus groups with mixed results.

In the case of an uncirculated/test-version of the new $100 bill, it was reported there were problems concerning an image of an “Asian” woman at a microscope. The bill was apparently re-designed to depict a female scientist that was generic – in a Caucasoid-is-more-non-descript sense.

Before anyone assumes this is pure racism, consider that there were objections from different ends of whatever spectrum people use in gauging this stuff: depicting Asians as good at science is an over-used stereotype. The yellow-brown color of the $100 bill – when combined with an Asian-Canadian – could be considered an unfortunate linkage.

“The original image was not designed or intended to be a person of a particular ethnic origin,” bank spokesman Jeremy Harrison said in an interview, citing policy that eschews depictions of ethnic groups on banknotes.

“But obviously when we got into focus groups, there was some thought the image appeared to represent a particular ethnic group, so modifications were made.”

In response to policy like that, columnist Andrew Coyne called the mini-furor a teachable moment to redress something he sees as a regrettable Canadian trait:

Because the underlying problem here isn’t racism, or political correctness. It’s blandness: a culture of banality that pervades official Canada, of which the bank notes are only a particular form.

What else can people get excited about? Sex is usually good for some raised eyebrows, right? Some of these focus groups apparently detected nudity on the new $20. Boom! Headlines were off and running.

Macleans Magazine asked: can you spot the naked woman?

CBC asked readers in an unscientific poll: Is Canada’s new $20 bill ‘pornographic’? With over 36,000 respondents clicking in, some 78% said naw, it’s fine. 12% said they could see the nudity, but didn’t have a problem with it.

The Inquisitor helps you find the sculpted nudity, which looks like…you got it. Sculptures of nudity.

True confession: After reading about this I went looking for the “naked women”. With effort, I sort of decided there might something like that to be seen in the shape of the transparent cut-out straddling the Peace Tower. It didn’t even occur to me the Vimy Memorial figurines might be the problem. But then I’m not generally on the look out for that sort of thing anyway.

It seems that sufficiently imaginative focus groups can find all sorts of images on the different bills: sex toys, skull and cross bones, secret codes – in addition to naked women – as recounted by this CTV report.

It’s not as sexy as nudity – or as intriguing as secret code – but another discovery was the Vimy Memorial depicted on the new $20 is not familiar to all. Some mistook that image for New York City’s twin towers – rather than a dramatic monument in France to honor Canadians killed in WW I.

Bills in new designs and materials have also been joined by new coins. In the case of the higher-value loonie ($1 coin) and toonie ($2 coin) it turns out that vending machines weren’t ready and will have to be re-tooled. Or, put another way, the designers of the coins failed to issue them in weights that would work with existing machines.

According to CBC news, costs for those adjustments are estimated at $40 million dollars. (Not to mention what consumers lose after putting money into a machine and not getting that candy bar, fare ticket or time on the parking meter.)

Some machines that take bills are having problems with the new polymer versions too, according to CBC. Global news in British Columbia is reporting some consumers are experiencing problems at ATMs and suggests customers count their bills before ending transactions.

The $1000 bill was retired from circulation in 2000. It’s still legal tender, but the notes that wind up in banks are pulled from circulation and destroyed. The National Post reports almost a million such notes (representing close to a billion in value) are still out there, often floating about in criminal circles:

“They are used now to pay off IOUs, not as traditional cash. They are used for buying and selling but not for cashing, because they know if they cash them, it is traceable,” said Jeffrey Robinson, a New York-based author of several landmark books on money laundering.

“They keep paying with them, over and over, and it’s only the last guy in line who has to worry about cashing them.”

And, as mentioned before, the humble penny is being phased out here too.

To close on a positive note, the Canadian Press reports that Canadian currency may join a fairly exclusive club:

The International Monetary Fund signalled in a new report it is considering asking foreign countries to report their holdings of Canadian and Australian dollars separately, which would technically make them global reserve currencies.

It would be the first addition to the list of five reserve currencies — the U.S. greenback, the Japanese yen, the euro, the British sterling and Swiss franc — since 1999.

So, plastic or metal – naked or clothed – Canadian money packs some oomph.