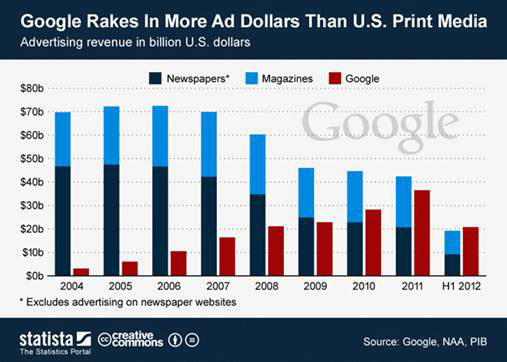 Sometimes a simple chart says so much.

Like this one, showing a steep decline in ad revenue – plus a monetary migration away from what I’ll call old media (newspapers and magazines) to the web, specifically to Google.

Mind you, it leaves out revenue from newspaper web ads. So perhaps all electronic media are getting more of that particular harvest.

But it’s among various indicators of just how difficult life has become for print media.

Eventually this may re-sort into some new mode of relative stability, something more predictable, that can be built upon, as the old model offered. (Will that be in 5 years, 10 years, 20 years – ever?)

If that happens, those with perfect hindsight can point out which strategies of adaptive change separated survivors from doomed dinosaurs.

Or maybe instability is the new normal. After all, the speed at which juggernauts can rise and fall is startling. Consider: if Google seems dominent and invincible now, only a decade ago that role was held by Microsoft. (We have not even heard of the Google of tomorrow yet.)

These days, change seems to sit atop media’s old three-legged stool of content, audience and revenue.

What a challenge it is to keep all that stable.

While this evolutionary upheaval is up-ending print news and entertainment, it spills over into all sorts of other realms as well.

Are you having to adapt your industry (your life?) to ever-accelerating change?

How’s that going – and what guideposts would you offer to fellow travelers?

15 Comments on “Follow the money – ‘old media’ falling further behind”