Are citizens entitled to know who they are dealing with, when interacting with government personnel and public safety officers? Do name tags put some front-line staff at unacceptable risk?

Name tags have been so prevalent in the U.S. – from the military to police departments – that the question may seem strange. Isn’t that the norm? But the issue can generate debate, as with this controversy in Canada. 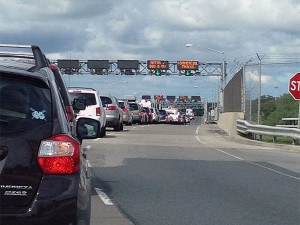 As of today, CBSA will be joining its partners such as the United States Customs and Border Protection, whose front-line uniform officers all wear personalized name tags.

Personalized name tags reflect the CBSA’s commitment to providing service excellence while reinforcing the accountability, professionalism, and integrity for which CBSA officers are known. I commend the CBSA for its continued efforts to ensure a safe, secure, and efficient border.

The CBC reported the Customs and Immigration Union objected to the new policy, saying indentifying front-line officers is potentially unsafe:

“Let there be no doubt: CIU vehemently opposes CBSA’s new name tag policy. In fact, CIU has been opposed to the policy since learning of the agency’s intent to implement it,” the union’s national president, Jean-Pierre Fortin, wrote in a memo to members. “CIU believes that wearing name tags exposes our members to unnecessary risks.

“We also told management that they should not be surprised by a serious push-back from many of our members who fear for their safety and health and who are determined to pursue every redress option available.”

The CBC article explores aspects of this issue in the case of the Toronto Police Department. The Toronto Police Association opposed name tags for five years before losing that battle in 2011.

According to the same article:

Ninety Toronto police officers were disciplined for removing their name tags during the G20 weekend in 2010.

Many officers did not wear name tags on their uniform during the summit, which in some instances made it difficult to identify them in photos and footage during subsequent reviews into police actions.

This post was begun on Tuesday, when the new policy was announced. By Wednesday (as reported on NCPR’s 8 o’ clock hour) some work-action slow-downs were happening at two international bridge crossings  (in Windsor, Ont., and Sarnia, Ont.).

The Canadian Boarder Services Agency had this official statement on that situation, including information on updates:

We thank you for your patience as we work to resolve this situation. We encourage all travellers to consult border wait times on the CBSA Web site at www.cbsa.gc.ca. Mobile travellers will find wait times easily accessible on our mobile Web site, or can follow us on Twitter for hourly border wait time updates at CBSA_BWT.

What’s your take on this issue? Is there a case to be made for official anonymity?

Or should personal accountability come with the uniform – which would mean name tags at the Canadian border are long over-due?