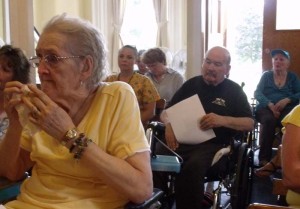 Peter Bauer, head of Protect the Adirondacks, is sparking new conversation about the aging demographics of the North Country with an essay he published on his green group’s website.

(Hat tip to the Adirondack Almanack, which drew my attention to the article.)

The “myth” as Bauer describes it, is that the Adirondack Park is slouching toward a kind of geriatric end-game, where we’ll be too old to maintain community institutions, keep schools alive, and maintain a vibrant economy.

The “reality” in Bauer’s view is that we appear older than the rest of New York and America only because we haven’t enjoyed the wave of mostly Hispanic immigration that has infused younger families into other communities.

“The population of the Adirondack Park is overwhelmingly white,” Bauer writes.  “And the median age of white populations in New York and across the U.S. is significantly higher than for non-white populations.”

Bauer is correct in the abstract.  As we’ve noted here on the In Box before, many of the the most vibrant rural communities in the US are the ones that are attracting Hispanic immigrants.

But while the North Country’s economy succeeded a century ago in attracting waves of immigrants — Lebanese, eastern European Jews, French Canadians and so on — that’s just not happening now.

There aren’t jobs or industries here to draw a “second wave” of people to a new and better life in the North Country.

It’s also probably true that a broader cultural shift toward a warm-weather affinity makes our region a tougher sell even where jobs are available.

(I suspect that the economy of the northern US has been harmed more by the invention of the air conditioner, which opened up the South and the Southwest to migration, than by almost any other single factor.)

Still, Bauer’s essay fails to grapple with this question.  If the “new” and younger America is more multi-ethnic, more Hispanic, why aren’t we tapping into that?  And what does it mean for our future?

It’s worth noting that NCPR’s reporting has also found strong evidence to support the conclusion that a lot of young people who would like to remain in the North Country find it difficult to do so.

So while the lack of immigration may be the larger factor — I think Bauer is right about that — the “lived” experience of the Adirondacks is still one where many people see young family members forced to move away to find jobs, opportunity and advancement.

Whatever the cause of the Adirondack Park’s aging, the fact that we are greying to a troubling degree is significant.

Obviously, this has become political football, difficult to talk about intelligently.

Opponents of the Park’s environmental regulations have sometimes offered a simplistic narrative, claiming that green-red tape is the single largest factor (or even the only factor) killing our future.

As Bauer notes, there is very little evidence to support that claim.  Communities located in the North Country outside the blue line fare, in many cases, much worse than those within.

But it’s also true that supporters of the Adirondacks’ ecological framework have often tried to sidestep some home truths.  Many of our most important “hub” towns are greying rapidly, losing infrastructure and services at an alarming rate.

The allure and quality of life provided by the Park’s vast green spaces — and the promise of a wilderness-based tourism industry — just haven’t produced the jobs and investments and sustainable communities that many hoped for.

My hope, articulated many times before, is that the Adirondack Park’s robust institutions — including the APA, Adirondack Association of Towns and Villages, and green groups like Bauer’s Protect — will help us to avoid that fate, or at least shape it.

My worry, however, is that we will continue to quibble over why we’ve reached this dangerous point, deferring the hard work of finding workable, realistic solutions until it’s too late.

53 Comments on “Are Adirondackers too old, or too white? Both.”