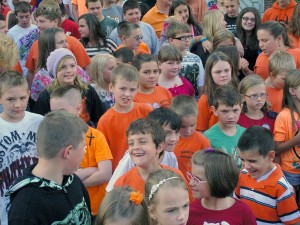 Hamilton County’s population has dropped by more than 1% since 2010. First day of school at Indian Lake Central School in Hamilton County. Photo of the Day, 9/7/12: George DeChant.

New US Census data released last week shows many counties in the North Country taking another significant hit to their population.

The drops aren’t precipitous, but the latest numbers continue a trend that many local government leaders have described as disturbing.

Essex County lost nearly 600 residents over a two-year period, from 2010 to 2012, according to Federal estimates.  That’s a decline of roughly 1 percent.  Clinton County, meanwhile, lost more than 500 people, reflecting a .6% erosion.

One region that’s been heavily debated in recent years is Hamilton County, where the number of residents declined by just over 50 people.  That may sound trivial, but the population there is now under 4,800 — for the entire county.

Other counties in the region, including Franklin, Lewis, St. Lawrence and Warren, were essentially flat or saw modest increases.

The one North Country county that bucked the trend was Jefferson, home to the Fort Drum Army base, which grew by more than 4,000 residents.  That’s a 3.5% increase.

On his blog, Watertown Mayor Jeff Graham noted that Jefferson County has more than 120,000 residents, a big milestone.

“We are whiter, poorer, less educated than the average New Yorker,” Graham writes, “but our per capital retail spending is above average, likely a reflection of Canadian shoppers.”

Census figures also show that North Country residents tend to be significantly older than New York state as a whole, with far more residents over 65 and far fewer young people, under the age of 18.

The significance and impact of the region’s gradual demographic shift has been hotly debated in recent years, with some local government leaders arguing that rural communities face serious decline.

Others, including some environmental activists, have asserted that the numbers reflect a relatively stable population when compared with parts of central and western New York that have seen much steeper declines.