Subscribe
iTunesSpotifyGoogle PlayRSS
by Lucy Martin on May 26th, 2013

Ash trees are under threat in many areas around North America thanks to the emerald ash borer. A march of that insect threat continues in New York State as well, according to this account from David Fugura at Syracuse.com:

With the confirmation of EAB in Delaware and Otsego counties, New York now has 15 counties where EAB has been found. Most of the infested areas are small and localized, while more than 98 percent of New York’s forests and communities are not yet infested.

NCPR has covered this topic for years, and the outlook for ash trees has not been terribly hopeful. Here’s a Sept. 2012 map of affected and quarantined counties in NYS: 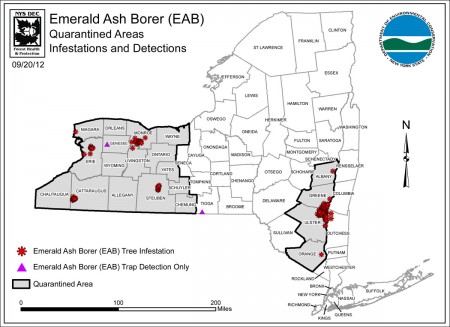 Apparently, the common ash in parts of Europe and England is also struggling with Chalara fraxinea fungus, which causes dieback. That disease threat has spread to Wales (which is easy enough on a contiguous land mass). Sadly, that has also hopped the surrounding sea and is now reported in Ireland.

Ash trees are a classic element of landscape and culture in England and Wales. (Indeed, even in far-off Hawaii I was taught the Welsh folk tune “The Ash Grove” back in elementary school.) The UK’s Gaurdian called the situation there “a disaster in the making“.

Matters do look grim for the poor ash tree.

Recent news reports add a wrinkle to that dour outlook: there may be some relationship between higher rates of human mortality and threats to tree health, according to a study published in February by the American Journal of Preventative Medicine: The Relationship Between Trees and Human Health: Evidence from the Spread of the Emerald Ash Borer

As summarized by an article in the Washington Post:

A study in February’s American Journal of Preventive Medicine showed that deaths from cardiovascular and lower respiratory illnesses rose as ash trees vanished. The study found that the EAB’s effects can be linked to more than 21,000 deaths — an additional 24 deaths per 100,000 people every year, a 10 percent increase in mortality for those diseases.

Is there a causal link? Well, that awaits further study. It is generally understood, though, that healthy trees do contribute to a healtier environment for living things, including humans.

Ash makes up a significant percentage of trees in the Ottawa area, perhaps as much as 25%. Most or all are expected to be lost over time to the current insect threat. The Ottawa Citizen’s Tom Spears wrote about this recently, in light of the study in question:

The greatest jump in deaths was in communities where people had higher-than-average incomes and more education, which are often the places with the most trees.

One Ottawa physician says this is more evidence for protecting the ash trees.

“You want them because they are beautiful, natural cleaners (of air) and protectors of us,” said Dr. Curtis Lavoie of the Children’s Hospital of Eastern Ontario.

“I see a lot of asthma, a lot of emphysema, a lot of pneumonia” as an emergency physician, he said. “It’s on the rise, and I think it’s largely related to pollution.”

It may be that healthy trees in general – any trees – will provide a protective benefit. Which raises some questions. Should planners make a special effort to replace lost ash trees with an equivalent number of other tree species? Or is this a bigger lesson? Perhaps all trees, all species, need conditions that will keep them in continued health.

If so, that’s going to be a tall order.

I am put in mind of the old saying: “The best time to plant a tree is 20 years ago. The next best time is now.”