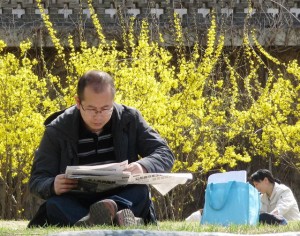 Good Friday to you! (It’s not actually Good Friday, but I hope you’re having a good one.)

Today in the news, North Country Congressman Bill Owens’ amendment to the $38.9 billion Department of Homeland Security appropriations bill for next year is moving forward on the House floor. That amendment basically blocks a study that would look at a border-crossing fee on land between the US and Canada. The possibility of that fee aroused the ire of Owens and Vermont Senator Patrick Leahy, who both argued it would seriously hurt businesses in our border region. In a press release yesterday, Owens said the fee wouldn’t do the government much good either:

Adding a fee to cross the border would cause tremendous damage for the businesses that depend on cross-border tourism and commerce, while doing little to raise revenue for the government.

In positive news for pregnant ladies and parents of young children, the New York State Department of Health has updated the income guidelines for the federal Special Supplemental Nutrition Program for Women, Infants and Children (that’s WIC to you), so that a family of four whose gross annual income is just over $43,500 now qualifies for the federal aid program (here are the new guidelines). That’s according to North Country Now. The program provides vouchers that help families by healthy foods, along with formula, cereal and baby food for families with infants. It also provides nutrition education and breastfeeding support.

And in the world of heroic animals, the Watertown Daily Times reports today that the North Country Kennel Club (which is based in Sandy Creek) is looking to raise $2,800 to outfit area police dogs with bulletproof vests. The vests would go to Watertown’s Police Department, the Jefferson County Sheriff’s Department, and the Fulton PD. The idea was a response to the shooting death of a police German Shepherd in March’s standoff in Herkimer (four people were killed in the shooting.)

In our newsroom today, Brian Mann reports on the state’s plans to take another look at the Adirondack rail corridor. Fans of the seasonal tourism railroad aren’t happy; fans of the idea of remaking the rail trail for various year-round uses, are. And we look at how a proposed two percent cap in state tax assessment increases for agricultural land (follow me?) could impact people in the North Country who aren’t farmers.

Also, we get leisurely with David Sommerstein’s report on his bass fishing expedition; and it’s safe to assume Hammond’s Joyce Wood will be doing a lot of getting leisurely after winning $2 million in the New York Lottery.

And finally,  Colton’s museum starts of its exhibit on the 1940s with an evening of music and stories from that decade. Cool!

Have a wonderful weekend, and as they say, may the good news be yours.