State Senator Betty Little is delighted with Governor Andrew Cuomo’s picks for the Adirondack Park Agency board, which were confirmed yesterday.

“I think the three members who are returning and having a new term have really done a great job on the Park commission, really balanced with the economy and the environment,” Little told me on Wednesday.

She noted that the two new members are landowners and business-people, including Daniel Wilt from Hamilton County and Karen Feldman from the Hudson River Valley who owns property in the Park.

Environmental groups are less cheerful about the texture of Cuomo’s picks for the APA commission.

But he noted that veteran environmentalist Dick Booth — a professor of regional planning at Cornell University — wasn’t reappointed.

“We are disappointed that the Governor did not re-nominated existing commissioner Richard Booth of Ithaca,” Sheehan wrote, describing him as “an expert in environmental law” who “deserves a new term.”

A native of Plattsburgh, Booth has been an outspoken critic of some of the APA’s biggest decisions in recent years, including the approval of permits for the Adirondack Club and Resort project in Tupper Lake.

(Booth, ,who was once considered for the APA chairman’s post, continues to sit on the panel and will do so until Cuomo either reappoints him or chooses someone else to fill the post.) 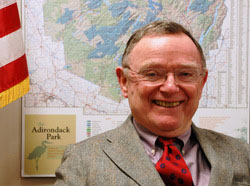 Cecil Wray, a veteran APA commissioner with long ties to the environmental community, is stepping aside voluntarily this summer. (Source: APA)

Another APA commissioner with deep ties to the environmental community, Cecil Wray, is stepping aside this summer — departing voluntarily.

Peter Bauer, head of Protect the Adirondacks, issued a statement this week arguing that this latest round of appointments “makes a weak APA board even weaker.”

“Through these nominations, Governor Cuomo has made it clear what path he wants the APA to march,” Bauer wrote in a statement.

“There is not an environmentalist within five miles of his nominations.  The Governor has said the Adirondack Park is open for business and this group of APA Board members will single-mindedly implement the Governor’s wishes.

Gibson argued that Booth — who, again, wasn’t reappointed by Cuomo — “appears to be only one member of the APA today who, month in and month out, consistently practices what the law mandates.”

In his column, Gibson quotes a letter written in the 1970s by former APA commissioner Mary Prime, addressed to then-Governor Hugh Carey.

In criticizing the qualifications of Carey’s appointments to the APA board, Prime worried that “the Agency commission will soon degenerate into a policy-making group of questionable competence and dubious commitment.”

Increasingly, local government and pro-development voices — including Senator Little — have expressed satisfaction with the APA’s decision-making, while some green groups have been more adversarial, particularly following the Big Tupper decision.

But as we noted in a previous column, environmental groups themselves have also been shifting their focus, talking more about pocketbook issues and jobs in the Park, as well as open space and habitat preservation.

So what do you think?  Is the APA finding the right balance?  Would you like to see more commissioners with green cred?  As always, comments welcome below.

27 Comments on “Are green activists unwelcome on Cuomo’s APA commission?”