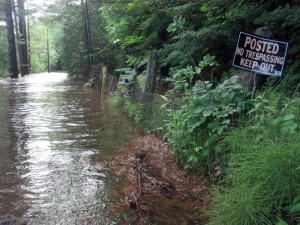 Update, 4:45 pm: Nora again in Canton — we’ll be continuing to follow this story with Brian in the Adirondacks, but in the meantime you can check your weather conditions on our weather page, where you’ll also find weather alerts by county.

Road closure info for New York state is at: http://www.511ny.org/mapview.aspx

Road closure info for Vermont is at: http://vtransmaps.vermont.gov/VTrans511/511live.htm

Update, 4:31pm: Hi, Nora here in relatively dry Canton. Radio Bob’s been watching road closures, says the only one still listed on the NYS DOT web site is the following:

Reported By: NYSDOT: closed to traffic, flooding on NY 9N in both directions from Town of Jay; Town of Keene Line to Town of Black Brook; Town of Ausable Line until 12:00 PM, 06/29/13. Comment: RT 9N closed due to flooding between the town of Jay and Ausable Forks 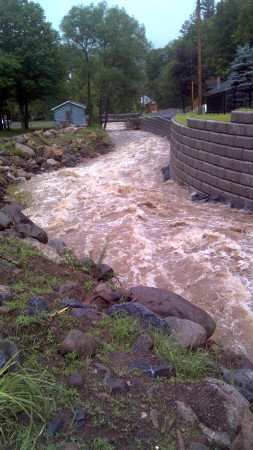 This would seem to indicate that the Elizabethtown-area closure of Rte. 9 had ended and that road had been reopened, but if you’re there and there are road closure signs please obey them. And stay careful and safe regardless of where you are.

Elizabethtown area:  Closed to traffic, flooding on US 9 in both directions from NY 73 to NY 9N until further notice. Comment: Rte 9 closed from Rte 73 to Rte 9N between North Hudson and Elizabethtown…

Keene-Jay area:  Closed to traffic, flooding on NY 9N in both directions from Town of Jay; Town of Keene Line to Town of Black Brook; Town of Ausable Line until 12:00 PM, 06/29/13. Comment: RT 9N closed due to flooding between the town of Jay and Ausable Forks.

The latest from the National Weather Service in Burlington shows the Ausable River hitting 9.55 feet as of 2:45 pm today at Ausable Forks.  That’s 2.55 feet above flood stage.  NWS predicting a rapid drop-off through the afternoon.  However, the flood watch remains in effect through this evening.  A state of emergency has been declared by many communities and Governor Andrew Cuomo.  Details below…

Balm of Gilead Brook, which flows next to the steep Barton Mines Road, jumped its banks, and in a matter of minutes, was surrounding homes and eating away at the thoroughfare.

“This whole road was a river,” said Marcia Norman, who was evacuated with her family by fire crews shortly after 9 a.m.

Meanwhile, in the Essex County region of the Park, high waters have force some evacuations and road closures.  This from the Plattsburgh Press Republican’s Kim Dedham in Elizabethtown:

Town Councilman Ben Morris was at the intersection with several local businessmen, including his brother, Matt Morris, and Wayne Shepard.

“We’re preparing for the worst,” Ben said. “We feel it’s a precaution to get people out of the downtown area.”

Governor Andrew Cuomo has declared a state of emergency in much of the North Country.  Here are details of that declaration.

Governor Andrew M. Cuomo today issued a disaster declaration for Broome, Chenango, Clinton, Delaware, Essex, Franklin, Herkimer, Madison, Montgomery, Oneida, Otsego, Tioga, Schoharie, St. Lawrence and Warren counties that have been hit by severe storms and flooding.
The Governor has activated the New York State Office of Emergency Management (NYSOEM) to closely monitor the impacted areas and to assist counties with ongoing rescue and recovery efforts.
“The State is taking action to provide immediate assistance and support to counties in the Mohawk River Valley which are experiencing floods,” said Governor Cuomo. “I will be closely monitoring the situation and my administration will continue to coordinate with first responders in all of the affected flooded areas. I urge New Yorkers in these areas to monitor news reports and follow directions from emergency personnel on the ground.”New York State Division of Homeland Security and Emergency Services (DHSES) Commissioner Jerome M. Hauer said, “With more rain in the forecast, there is a potential for more flooding in more areas in the region. We are asking people to stay alert, listen to emergency instructions and cooperate with local officials if needed.”

Note: This post is updated as of 12:00pm Friday. For the most current weather information, go to our weather page and search for your Zip Code.

Brian Mann is in Keene right now exploring flooding and potential flooding in the area. He just called in with this update:

“Across this part of the Adirondacks we’re seeing road closures, and some areas where flooding has damaged roadways, so local and state road crews are working to repair flooded-out areas.

There is some water around homes, but no actual property damage yet. Keene Town Supervisor Bill Ferebee says ‘so far things are holding pretty well and we’re hoping that the water has begun to recede.'” 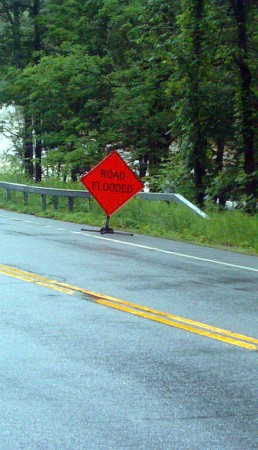 …The flood warning continues for the following rivers in new

If you live or travel near streams and rivers…seek higher ground immediately at first signs of rising water. Obey all road closure

Signs…they are there for your safety. Do not attempt to drive through flooded areas…most flood deaths occur in automobiles. Turn around, don`t drown!

The flood warning continues for the East Branch AuSable River at AuSable Forks.

* until Saturday morning…or until the warning is cancelled.

* forecast…the river will continue rising to near 8.6 feet by

Friday afternoon. The river will fall below flood stage after

be covered. In Keene…water will cover Hulls Falls Road…and

routes 73 and 9n near Marcy Field.

It also has a flood watch in effect through 8pm for the following areas: