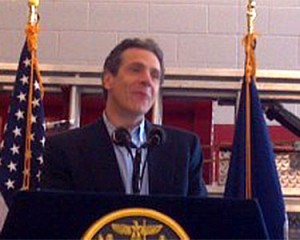 The National Weather Service says it was a historically wet month in June, with rain totals measured in Massena coming in at a soggy 7.72 inches.  That’s nearly an inch and a half above the last record set a decade ago.  That’s a lot of water.

During his visit to Keene over the weekend, Governor Andrew Cuomo talked about New York’s recent spate of “extreme” weather and the need to build new and better infrastructure to deal with the problem.

I believe one of the new challenges for the state is extreme weather, call it what you want.  Climate change tends to be a politicized topic, but I know one thing for sure.  We have more extreme weather than we’ve ever seen before.

We know the ocean is warming, we know that’s creating turbulent weather, and we know first-hand that we’ve been feeling it here in New York state.  Hurricane Sandy, Irene, Lee, it just goes on and on.  It seems like it’s a never-ending continuum of extreme weather.

Cuomo’s description of changing weather patterns in New York struck me as a little ambiguous, particularly his statement that ‘climate changes tends to be politicized’ and his use of the phrases ‘extreme weather’ and ‘call it what you want’ rather than speaking plainly about climate change.

So I asked him if he still has doubts about the science of global warming.  He answered this way:

I believe it’s very real. Some people discount it for political reasons and they think it’s the beginning of a political speech.  What I’m trying to say to them is that it has nothing to do with politics..

The inarguable fact is that we have extreme weather patterns.  We have more storms, more often, and they’re more severe than they have been before.

And that’s a reality.  As the state’s chief executive, this gets very practical for me.  It can be a matter of life and death.

What do you think?  As the gray weather continues do you see climate change, or just a drizzly summer?  And what do you think of Cuomo’s leadership on global warming?  Comments welcome.