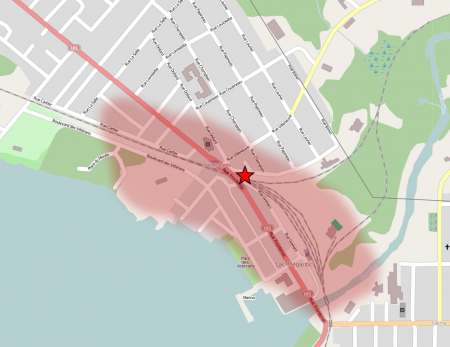 This past April, Americans were horrified by a fertilizer plant explosion in West, Texas – which killed 15 and injured close to 160 residents.

Now the small Quebec town of Lac-Mégantic has experienced similar devastation caused by Saturday’s unattended train derailment which caused an explosion of tanker cars carrying crude oil. Concerns exist about the possibility of contamination in the St. Lawrence waterway, with this from the Associated Press reporting on the incident:

Crews were working to contain 100,000 liters (27,000 gallons) of light crude that spilled from the tankers and made its way into nearby waterways. There were fears it could flow into the St. Lawrence River all the way to Quebec City.

Quebec’s Environment Ministry Spokesman Eric Cardinal said officials remained hopeful they could contain more than 85 per cent of the spill.

As would be expected, news outlets in Canada are giving this event intensive coverage, including this from the Montreal Gazette. Here is graphic of the blast zone from the National Post and a timetable of events as reconstructed by CBC.

Some 40 buildings in the center of Lac-Mégantic were blown to smithereens, along with anyone who was too close. As reported in the Toronto Star on Sunday July 7:

One Red Cross volunteer who asked not to be identified because he was not authorized to speak to the media put it bluntly: “You have to understand: there are no wounded. They’re all dead.” 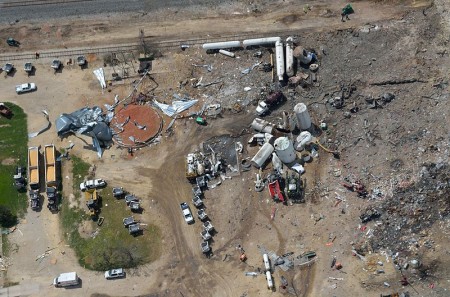 By Tuesday morning  the death toll stood at 13. With many still unaccounted for (now up to 50), the list of fatalities seems sure to rise.

Recent developments include comments from the  head of the train company stating his belief that tampering was involved, as reported by Postmedia News:

“We have evidence of this,” said Ed Burkhardt, chairman of The Montreal, Maine & Atlantic Railway. “But this is an item that needs further investigation. We need to talk to some people we believe have knowledge of this.” A probe by the Transportation Safety Board is underway to determine what caused the company’s parked, unattended train, which included five locomotives and 72 tanker cars, to roll toward the town of 6,000 early Saturday morning with its load of crude oil and derail in the city centre.

The two tragedies also stand as terrible cautionary tales: equivalent events could easily happen in similar towns with chemical plants, or tracks that run through towns.

As if that wasn’t enough danger to digest, the cargo that exploded  – oil – brings up all sorts of related debates about fossile fuel reliance and transportation. Here’s more on that from this New York Times article of July 7th:

“We have an explosion of tight oil production in Canada and the United States, and most of it is moving by train,” said Anthony Swift, a lawyer with the Natural Resources Defense Council in Washington. “But this process has happened without due diligence.”

The good news between a pipeline spill and a train spill (if one can call it such) is that tankers contain a fixed amount of oil.

While West, Texas and Lac-Mégantic, Quebec stand as cautionary accidents that should be understood to prevent further disasters, that’s a larger, technical analysis. One which will be debated (or ignored?) for years to come.

Indeed, rail safety has long been up for discussion – including rail safety in Lac-Mégantic before this event – as detailed in this article from the Globe and Mail.

In the present, though, what remains is an actual town in our part of the world, ripped apart by the horror and heartbreak of a terrible, terrible event.