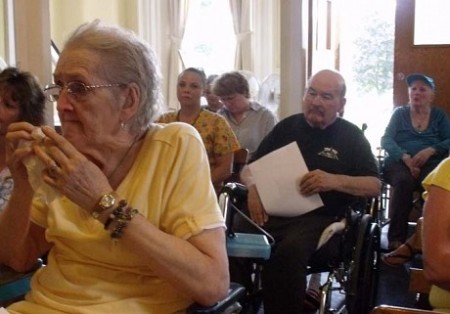 Senior residents at Horace Nye listening to a debate over the future of their nursing home in 2012. NCPR file Photo: Brian Mann

The decision last year to privatize the Essex County-owned Horace Nye Nursing Home wasn’t a simple one; nor was it uncontroversial. But as an article in the Plattsburgh Press-Republican reminds us, it is a decision that’s moving forward as I write. The paper reports that Essex County officials expect the transfer of the home to private ownership will be done before the end of the year.

OK, so as I’ve said, this hasn’t been uncontroversial. The decision to sell Horace Nye raised all kinds of questions about elder care, the responsibilities of the state, and the future of Adirondack communities. And those people who opposed it a year ago haven’t suddenly become completely comfortable with the sale, either. This week, Moriah Town Supervisor Tom Scozzafava raised the question of some rumors he’s heard that the home’s new owner will cut services. County Attorney Daniel Manning III has responded that the contract Centers for Specialty Care signed with Horace Nye calls for the home to be operated in about the same way post-transfer as it has been until now.

The new owner is also obligated by the agreement, the paper reports, “to offer jobs to current Horace Nye employees, to give first preference for beds to county residents and to allow all residents there now to stay if they wish.”