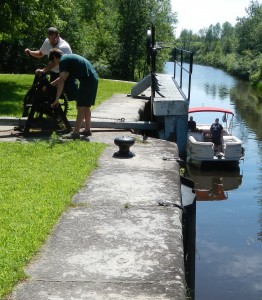 Here’s a specific instance of something that taxpayers and administrator everywhere may need to think about. Namely: once programs start cutting, is a self-fulfilling, downward spiral created?

Take Ontario’s Rideau Canal. It’s historic, picturesque and popular. Area residents love it. The canal draws visitors who bring much-needed revenue to diverse communities from Kingston to Ottawa. The canal is run by Parks Canada, which wrestles with the same rising costs and lower funding most agencies face these days.

As reported in previous posts, Parks Canada considered raising fees. But the proposed hikes seemed draconian. Public backlash lead to a freeze on fees, pending further study. The remaining cost-cutting option was to reduce hours of operation, which went into effect this season.

Well, the summer boat traffic statistics are in for 2013 and (big surprise) they’ve been down from the get-go.

As reported by Don Butler for the Ottawa Citizen, the over-all season is on track for a new modern low:

Through the end of August, 51,202 boats had passed through the locks since the 181-year-old canal — declared a World Heritage Site by UNESCO in 2007 — opened for the season on May 17.

The canal remains open until Oct. 14. But with boat traffic typically low through the fall shoulder season, 2013 lockages are unlikely to reach the previous record seasonal low of 58,915 in 2004, when a strike by lockmasters disrupted operations.

Some observers fault Parks Canada for generating fear and confusion about fee hikes and shorter hours, or for not properly promoting the canal. Parks Canada points to contributing factors totally beyond their control, including a cool spring, changing patterns of boat ownership and use, and high fuel costs – all of which afffect traffic as well.

Setting this one case aside, the broader management issues are worth pondering. If budgets are tight (and they are) and changes have to come (as they may) how can services and programs still look and feel robust enough to be of use?

Because if something looks ill and feels grumpy, that alone can lead to a downward spiral of reduced demand, which justifies lower funding, which further reduces demand. Failure to thrive can become death by neglect, a regrettable outcome.

Civil servants, business owners, taxpayers and civic groups, is this something you have lived through?

How would you suggest making cuts while keeping the service in question attractive enough to survive – and perhaps thrive – while getting through tough times?