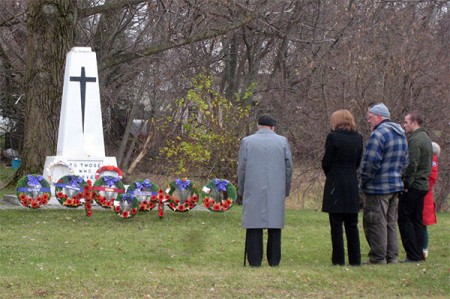 Canadians mark Remembrance Day in gatherings both large and small – like this one in North Gower yesterday. Photo: Lucy Martin

November 11th marks Veteran’s Day in the U.S. and Remembrance Day in Canada. They may sound like identical events, but these two are actually slightly different.

Remembrance Day is much more like the U.S.’s Memorial Day. While everyone knows military service is part of the story, the solemn focus in Canada is largely directed toward those who died in uniform.

Holding the observance on the date World War I ended adds extra emotional punch. It’s hard to not be moved when remembering the degree of suffering and death wars extract.

When it comes to world affairs Canada has taken something of a twin track. If the cause seems right, Canadians are there to fight and die. But, starting in the mid 1950’s, if peace seems like a possible, or preferable, option, Canada has provided peacekeepers. This duality lets hawks and doves find something they can feel proud of, or hope to continue. 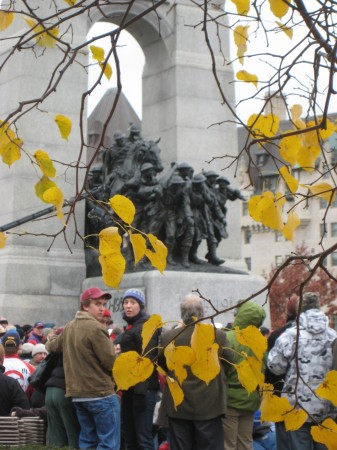 I have attended the national ceremony near Parliament Hill on several occasions. To me at least, it’s always moving. The multi-generational crowds are typically large. And respectful. Older veterans are there no matter the weather. When they pass by, marching or in wheelchairs, the applause from the crowds brings a tear to many, many eyes.

Here’s a round up of Monday’s Remembrance Day events from Global News, including a time-lapse video of the crush that forms around the War Memorial itself.

Yesterday also happened to be the 200th anniversary of the Battle of Crysler’s Farm, near present-day Morrisburg Ontario. (And who doesn’t have a Facebook page these days? Here one for Friends of Crysler’s Farm.)

As mentioned in previous posts, the ruling Conservative Party has devoted considerable effort and funding to publicize major events from the War of 1812. So maybe it shouldn’t be a surprise that Prime Minister Stephen Harper found a way to do the National Remembrance Day ceremony Monday morning and head down to the current battle memorial site Monday afternoon.

Morrisbsurg is a bit of a drive from big city newsrooms and the event seemingly got better coverage from regional papers than the main media outlets. So let’s hear it for the militia re-eneactors who stood in the cold to be the story, and the intrepid reporters who went out to cover it. Like Greg Peerenboom from Cornwall’s Standard-Freeholder: 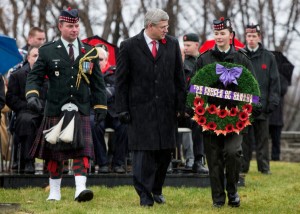 Prime Minister Stephen Harper also attended Remembance Day observances at the Crysler’s Farm battlefield near Morrisburg, Ontario. It was the 200th anniversary of that War of 1812 battle that turned back an American invasion. Photo: Office of the Prime Minister

The victory at the Battle of Crysler’s Farm, involving about 12,000 soldiers, including Canadian farmers and tradesmen, helped turn back an American invasion on Nov. 11, 1813.

“These soldiers, these Canadians were ordinary men who did an extraordinary thing,” Harper said Monday, with the massive spike monument flanked with the Maple Leaf, Ontario, British and regimental flags, behind him.

“Their gift to us is a separate and distinct country on this continent, true, north strong and free.”

The Prime Minister also announced the S,D and G Highlanders (the Glens) were just given notice that Queen Elizabeth had become their colonel in chief, which drew warm applause.

The Glens are the military descendants to the militia units formed for the War of 1812 and went on to many accomplishments in later conflicts.

Hundreds of local students, teachers and dignitaries, not to mention other onlookers, stood in terrible conditions to view the ceremony. Cold, wet rain, combined with a blustery wind, gave everyone a sense of what life was like during the Battle of Crysler’s Farm.

On that day in 1813 cold, wet conditions prevailed. It is said in Cornwall U.S. troops burned fence posts the night before the battle, to stay warm.

The battle site was designated a National Historic Site in 1920. The area of Crysler’s Farm was permanently submerged in 1958 during the construction of the St. Lawrence Seaway. A monument (erected in 1895) commemorating the battle was moved from Crysler’s Farm to Upper Canada Village, near Morrisburg.

While Canadians may take pride in fending off the big guy from across the river, there is wide-spread agreement the real victory came in establishing peaceful relations between the two nations. 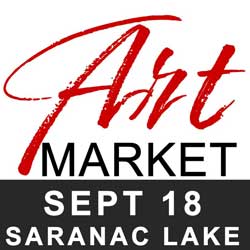