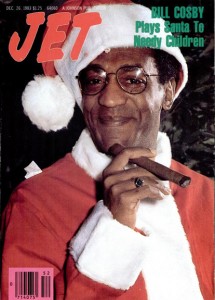 This last week America has been embroiled in what appears, on its face, to be a typically stupid — maybe STUPID, with capital letters is called for here — discussion of race.

In her article, Aisha Harris argues that it’s time to acknowledge that for many people of color, the public iconography doesn’t match the private experience.

“When I was a kid, I knew two different Santa Clauses,” Harris writes, the first being the one you see almost everywhere, with “skin as pink as bubble gum.”

“Then there was the Santa in my family’s household, in the form of ornaments, cards, and holiday figurines. A near-carbon copy of the first one—big belly, rosy cheeks, long white beard: check, check, check. But his skin was as dark as mine.”

Megyn Kelly, a high-profile anchor on Fox News, countered that “Santa just is white,” adding that “Santa is what he is.”

She went on to argue that Jesus, too, is white, suggesting that anyone who argues otherwise is part of the goofy, oversensitive PC-race police.

In the days since, Kelly has walked that back a bit.  She’s suggested that she was only joking and even made what amounts to a fairly sophisticated analysis of the way that race and public iconography work in America.

She acknowledged, in a later broadcast, that her own view of Santa is shaped by a “lifetime of exposure to the very same ‘commercials, mall casting calls, and movies’ that Harris references in her piece.

Kelly points to various Hollywood movies and public events, all portraying Santa as white.  “We continuously see St. Nick as a white man in modern day America.  Should that change?”

The Fox host suggests that “that debate got lost” because people we’re accusing her of race-baiting.  But actually, that’s what this is.  This is that debate.

You have a black woman suggesting that in an increasingly multicultural, multi-ethnic, multi-racial America, it’s time to rethink how we portray the imaginary figures and symbols that are meant to give us a shared experience.

And you have a white woman initially recoiling, suggesting that the very idea is ludicrous — but then taking a step back, drawing a deep breath, and engaging the conversation.

It’s worth pointing out that these symbols matter.  That’s why societies place so much emphasis on finding images that capture our shared imagination, our common ideals, even our shared sense of fun and play.

And that’s why this conversation feels so scary.  For a lot of us, it really does matter that the “jolly old elf” has skin of a certain color.

And we need to acknowledge that in 2013, from Uncle Sam to the Statue of Liberty to Mt. Rushmore to Santa, it’s hard for non-white Americans to find their faces in our shared popular narrative.

A discussion of whether this needs to change really is long overdue.

It’s not hard to imagine a future America that is truly multi-racial — with whites only one of a constellation of “minorities” — but where our shared popular images remain sort of blindly, weirdly Caucasian.

(We already live in a largely urban America — 83% urban — where much of our iconography remains rural.  That’s weird and disorienting enough.)

But it’s also important to point out that, clumsy and belated as this discussion has been — any time Fox News is shaping a national debate, hold onto your hats — it’s still revolutionary.

Kelly and her co-hosts at Fox clearly view themselves as defenders of largely unquestioned white privilege, of the notion that traditional American racial dynamic are the norm.  Anyone questioning them is guilty of “race-baiting.”

But just by grappling with the question, by attempting to articulate an argument for the status quo, she’s doing something fairly radical.

(France has toyed with the idea of re-imagining “Marianne,” the national female symbol of the Republic to reflect that nation’s growing immigrant population.)

Hopefully, at the end of the day, some of Kelly’s viewers — and some of Harris’s readers — will come away asking what are still for many of us uncomfortable questions.

What happens when our complex perceptions of race collide with familiar, popular images?  And what does our reaction say about our eagerness (or reluctance) to expand the definition of what normal America looks like?