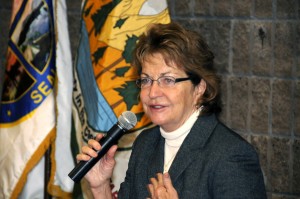 Little is the latest A-list Republican to choose not to run for the seat, now occupied by Democratic Rep. Bill Owens (D-Plattsburgh).

“Having taken some time to think about it, I’ve decided not to seek the Republican nomination for the open Congressional seat and will run for reelection to the New York State Senate as I had planned.  The past few years have been very productive and I’m hopeful for another strong legislative session this year.  Representing the residents of the 45th Senate District continues to be a tremendous honor.”

Published reports suggest that Republicans are searching for a more high-profile GOP candidate, now that Owens is out of the race — hoping to improve their shot at reclaiming the seat.

But Stefanik, who moved to Essex County last year to prepare for the race, remains the biggest name in the Republican ranks to commit.  She’s picked up endorsements from tea party icon Doug Hoffman and former state Sen. Ray Meier.