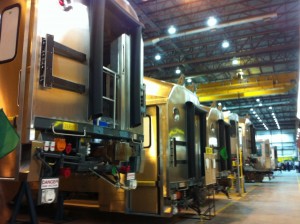 The Canadian Press reported today that Bombardier will lay off 1700 workers in its aerospace division. About 1100 of those workers, they report, are Canadian, mostly based in Montreal. The remaining 600 employees work in the U.S.

As far as we know now, the Plattsburgh plant isn’t involved in this cut. It’s part of Bombardier’s transportation division and makes rail cars. The Plattsburgh Press Republican reported a few weeks ago that the plant has a new order to build an additional 365 rail cars for the Bay Area Rapid Transit system in San Francisco.

We’ll be watching this story as it develops. In the mean time, here’s the Canadian Press full story:

Bombardier plans 1,700 layoffs from its aerospace division, mostly in Montreal, as it copes with delays with two new aircraft and a tough market.

The company disclosed the decision to its workforce an internal memo that says affected employees will be notified in the coming weeks, Bombardier spokeswoman Haley Dunne said Tuesday. Bombardier Inc. (TSX:BBD.B) said it needs to preserve cash amid delays in the CSeries commercial jet and Learjet 85 business jet as well as due to tough market conditions.

The announcement follows several recent setbacks for Bombardier, which is one of the world’s largest aircraft manufacturers.

It announced last week that its new CSeries commercial jet won’t be ready for service until the second half of 2015, several months later than its already-delayed previous goal.

On Monday, Bombardier said it received 19 per cent fewer new orders for commercial and business aircraft last year than in 2012.

The layoffs represent six per cent of the workforce at Bombardier Aerospace, one of the company’s two main division. Bombardier is also one of the world’s largest producers of equipment for transit systems.

About 1,100 of 22,200 Bombardier Aerospace employees in Canada are affected by the pending layoffs, about 80 per cent in Montreal.

The positions being cut involve unionized and management positions and include 300 already eliminated in December.