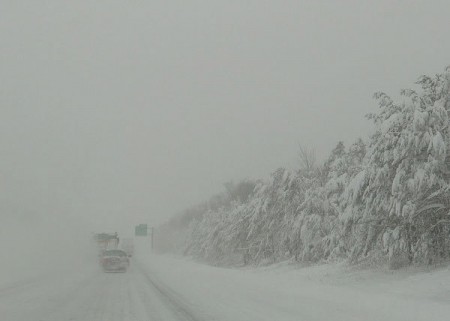 This has been another day to avoid driving or proceed with extra care, thanks to recent snow and gusty winds.

It’s actually quite beautiful as I write this – blue skies and lots of fluffy snow. But then the wind kicks up – and visibility can plummet, just like that.

Most traffic and accidents within Ottawa are handled by the Ottawa Police Service, which Tweeted that the day began badly:

Since 5am,now @ 38 collisions. Has Ottawa forgotten how 2 drive in the snow?Slow down, give yourself extra time 2 get to where u want 2 go.

By early afternoon the number of collisions was reported at 90, not including ones handled by the provincial police (OPP).

Meanwhile, blowing snow undoubtedly contributed to a situation on the northbound lanes of Highway 416, the major route to Ottawa from Prescott/Ogdensburg. The 416 north of the Roger Stevens on-ramp was closed for several hours today to clear a cluster of accidents.

According to the Ottawa Sun:

A portion of Hwy. 416 is closed following a multi-vehicle pileup involving two tractor-trailers.

According to the OPP, the trucks need to be removed, which is why the highway is closed northbound at Roger Stevens Dr. Emergency detours are in place. Up to eight vehicles are involved in the crash, which brought out a response from both firefighters and paramedics.

There are reports of several injuries, but it’s not known how serious.

OPP Const. Rheal Levac said it will be “a while” before the highway is re-opened.

Ontario’s Ministry of Transportation has an interactive map to check road conditions and closures. The City of Ottawa has a similar site too.

Looking at the situation on a regional scale, this spell of tricky weather began a few days ago. According to media reports a weather front known as an “Alberta Clipper” lead to 1600 crashes and 3 fatalities over the weekend across south-western Ontario.

Ottawa Police are urging caution. Avoid unnecessary travel. If you must drive, clear your vehicle of snow and  slow down. Conditions can change in a hurry, so maneuver with extra care.