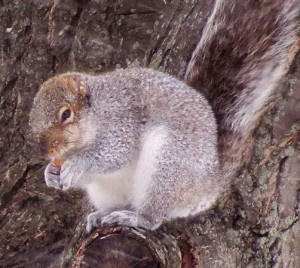 Friday’s Photo of the Day tells the story: Squirrel huddles with a frozen acorn in the lee of an oak tree during 35-mph winds at the height of the storm yesterday. Photo: Alice Connors, Cumberland Head, NY

Winter seemingly came early this time around. It stayed late and it sure hit hard.

With apologies, perhaps that was our fault. You see, the spouse and I enjoy cross country skiing. Every year we earnestly pray for snow. Hey! Success!

As one equally-happy outdoor enthusiast gushed on a cross country ski discussion board for Ottawa “This is the winter that keeps on giving!” I would feel like a ski widow except that I’m often out there too. A wonderful season, if you ski.

But I gather others are (shall we say?) less enthused. Take this feature story from Maclean’s Magazine, by Michael Friscolanti and Kate Lunau, which doesn’t mince words: “The winter that ruined everything“. The article is sub-headed: “It broke records, wreaked havoc on the roads and kneecapped the economy. It also showed us how ill-prepared Canada is for a future of extreme weather”. It has a laundry list of ways people have suffered, with some stats to show why:

On March 1, Regina broke a 130-year-old record for that day’s temperarture: -36° C, with a wind chill of -53° C. In Kenora, Ont., where all-time winter lows have wreaked havoc on its maze of underground pipes, the city is in the midst of a two-week boil-water advisory.

In Toronto, where the mercury also nosedived to the lowest point in two decades, the city surpassed its record for consecutive days with at least one centimetre of snow on the ground: 89, as of March 7, and counting. No town, though, amassed more white stuff than Stephenville, N.L. (population 7,800). The winter isn’t even over, and the seaside community has already been hammered with more than two metres (the same height, for the record, as Michael Jordan.) “In December, it snowed 26 days,” says Mayor Tom O’Brien. “The snow kept coming and coming. It wasn’t one big wallop.”

But so what, it’s just one bad year, right? More like the way things used to be. Well, maybe, maybe not. And that’s the point, according to the Maclean’s story:

“Municipalities, which means taxpayers, will struggle to deal with the liability generated from the extreme winter we’ve experienced,” says Jason Thistlethwaite, director of the University of Waterloo’s Climate Change Adaptation Project. “I’ve been reading too much of: ‘Well, the winter weather is an anomalous disruption in the recovery of the economy.’ No. This is a new normal. This is a new cost that needs to be incorporated into budget forecasts. You can’t call something an anomaly when it’s part of a larger pattern.”

Speaking of deep cold and higher costs, NCPR has already reported on the scarcity and expense of propane fuel this past winter, as with this story by Zach Hirsch. Friday morning Ontario consumers read that one of the province’s biggest natural gas companies is applying for a 40% rate hike, which will likely be requested by other suppliers as well. According to CBC news:

Enbridge applied to Ontario regulators for the price increase in the energy rates it charges millions of natural gas customers in the province.

The increase needs to be reviewed by the Ontario Energy Board before being implemented on April 1.

Enbridge spokesman Chris Meyer said this is all because storage pools of cheap gas have been depleted by this year’s extremely cold winter weather.

“Because the winter has gone on so long that lower price natural gas has been largely used up,” Meyer said.

OK, too much gloom. We need some hope here, people. Luckily, good old Rick Mercer knows where to find that. Here’s how Environment Canada’s 7-day weather forecast comes to the rescue.

Want more ways to smile instead of curse? Here’s a plea from a Colorado TV station to cut-it-out-with-the-photos-of-snow-covered-lawn-chairs-already! (Thanks to Nora Flaherty for sharing this on NCPR’s Facebook page, right after she shared photos of you-guessed-it.)

Yes, O winter of discontent. This too shall pass. We will thaw out – probably about 7 days from now.