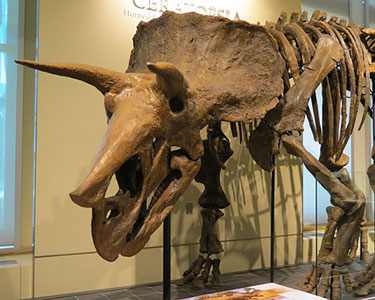 You would expect to see a dinosaur skeleton or two at the Canadian Museum of Nature in Ottawa, but there’s a lot more to it. For example–a public online database of 710,000 records of plants, animals, fossils, and minerals. Photo: Robert Linsdell, Creative Commons, some rights reserved

Technology sure can be a double-edged sword. Besides examples of excess in surveillance – or equally sinister pursuits –  in other wonderful ways knowledge is being set free, for all to see and use.

Take things like free e-books from Project Gutenberg. (It’s not new, but maybe more people should know about it.)

Along similar lines, many museums are digitizing their records and collections, making such material available to researchers or interested persons around the world. Examples include the British Museum: “There are currently 2,126,783 records available, which represent more than 3,500,000 objects. 823,748 records have one or more images.”

That’s pretty overwhelming, so try narrowing it down to something manageable, like artifacts recovered from the ruins of Pompeii. From which one can see singe items, like this wall painting of a bird pecking at cherries, or a portrait of a man and woman to make ancient times feel like people who once lived real lives.

The Metropolitan Museum of Art (regular adult admission $25) has 258,856 searchable items one may view for free online, many of which are not on display, such as this queen from a deck of playing cards, circa 1470-80.

Want more? Try the Smithsonian for everything Americana. (Drill down for local content, such as an 1866 painting “Whiteface Mountain from Lake Placid” by Sanford Robinson Gifford, or “Group skijoring behind 1920’s automobile“.)

Well, you get the point. It’s not that everything is, will be (or should be) available online. But more and more stuff is, from soup to nuts.

This week the Canadian Museum of Nature announced their own contribution to the world of online access. From this recent press release:

Ottawa, March 26, 2014—The Canadian Museum of Nature, Canada’s national museum of natural history, has launched a free scientific database featuring open access to more than 710,000 records of plants, animals, fossils, and minerals that are part of the museum’s national collections. The searchable online resource is accessible through the museum’s web site at nature.ca/collections-online.

The digitized records represent about one-quarter (or 22%) of the museum’s estimated 3.2 million “cataloguable units” of biological and geological material. Overall, the museum estimates it manages more than 10.5 million individual specimens that have been acquired over more than 150 years. The collections, which cover Canada and other parts of the world, are stored and curated at the museum’s Natural Heritage Campus in Gatineau, Quebec.

Now, this museum’s collection encompasses all of Canada (and more), which may seem “foreign” in some respects. But Canada and the U.S. (including New York and Vermont) share vast similarities in the realm of plants, animals, minerals and so forth. Which means this very much counts as a local resource for NCPR country too.

As detailed by Tom Spears in the Ottawa Citizen (speaking with plant scientist Jeff Saarela):

“With the Internet, we can share the information with the world,” mainly researchers, says Saarela.

The high resolution shows tiny details needed to identify plants. “It’s almost like a microscope where you can zoom in,” Saarela said.

“But it’s also accessible to the public,” he noted.

This opens up information to amateur birders, gardeners, nature lovers, high schools and the merely curious.

Before he ended up in Hawaii, my maternal grandfather did a fair bit of botanizing in places like the Gulf of St. Lawrence, Sable Island and Newfoundland. He had the good fortune to be hired to do summer expeditions for the Canadian government while completing a PhD, circa 1912-17. Much of that work went to the Canadian Museum of Nature. Using the advanced search function of this new data base, I could almost instantly compile a list of plant specimens he collected – along with a map of where they came from. With apologies to Grandfather, and other plant scientists, I’m not actually very interested in taxonomy. But what fun to “see” his travels and imagine him as a more-wholesome Indiana Jones. (A fair number of natural scientists have Hollywood-worthy wilderness adventures – minus the Nazis, supernatural religious relics or grave robbing.)

I don’t know which part of exploring museum collections appeals to you, if any. I just think it’s amazingly cool that so much is now at our fingertips.

In the realm of natural sciences, there’s even a clearinghouse portal for online data:

It allows anyone, anywhere to access data about all types of life on Earth, shared across national boundaries via the Internet.

Happy browsing and successful research to all.