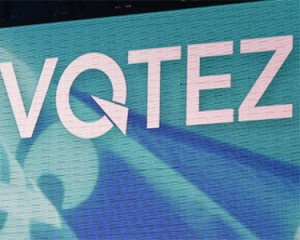 Of course speculation about results is just that until the polls close and all the votes are tallied. But most observers think Marois either misjudged her timing, or mis-stepped in the course of her campaign. Few now think she will attain the majority government she’d hoped for. Indeed, it’s at least possible she’ll be out altogether and mostly because the Parti Québécois could not steer clear of internal conflicts and a sacred cause not shared by enough of their neighbors.

The campaign has been a washout for sovereigntists. At a minimum it stands to set their referendum agenda back for years. Some PQ insiders are gloomily thinking decades.

Over the past month Quebec voters have all but spelled the three letters of the word NON in boldfaced characters for Pauline Marois to read.

As a result a party that has steadfastly refused to take no for an answer since the 1995 referendum can no longer reasonably argue that the two-thirds of Quebecers who oppose either a referendum and/or sovereignty don’t really mean it.

Outside of Quebec at least, much of the late-campaign analysis has taken on the tone of an obituary for Marois’ political career, as with this from the CBC’s Michelle Gagnon:

Clearly, her campaign slogan — Déterminé — is more than bluster: she is indeed one determined woman.

But, now, perhaps more than ever, a weekend away from election-day Monday, Marois’s entire future is on the line.

Short of securing the majority she seemed so confident she would win just four weeks ago when she called the vote, she may well be forced to take her leave, even as early as Monday night.

In this election cycle four parties are considered the main contenders: The Quebec Liberal Party, Parti Québécois, Coalition Avenir Québec and Québec solidaire. Here’s a summary of main party platforms or promises from the Montréal Gazette.

According to recent polling, the main beneficiary of the PQ’s miscalculation may be Quebec’s Liberal Party, lead by former neurosurgeon Philippe Couillard. Here’s a Q & A with Couillard from the CBC for those interested in learning more about his positions should he emerge as Quebec’s next premier.

To hold a majority, a single party must win at least 63 seats in the 125 seat assembly. According to this interactive guide from the CBC, there are actually 18 provincial parties in the mix, most of which will not win legislative seats.

English language summary sites for the Quebec election and election results can be followed on CBC and the Montréal Gazette.

What can be concluded from the whole exercise? That is a matter of opinion, but here’s one take from Michael Den Tandt of Postmedia News:

Quebec is actually a federation of nations, in spirit at least – a collective, comprising new immigrants and allophones, rural francophones, the urban francophone bourgeoisie, three main aboriginal nations, and anglophones, both rural and urban. Montreal is a nation unto itself. Each group is distinct; each has its own particular identity. But a clear majority share an appreciation for the security provided to all by the larger Canadian federation. This includes a majority of Quebec francophones, it turns out, and that is something the PQ did not foresee. It was a historic miscalculation.

An interesting turn of events, to be sure.

2 Comments on “Quebec’s dramatic election wraps up on Monday”