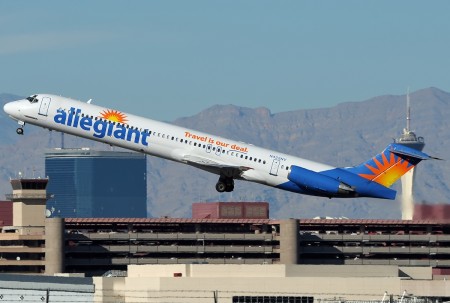 It’s not quite clear when it will start or where flights will go, but the Ogdensburg Bridge and Port Authority has announced that Allegiant Air  has signed a contract to start flying out of the airport. The Ogdensburg Journal is reporting that the contract, approved Monday, could increase traffic by up to 40,000 passengers a year if they’re flying on larger jets.

It’s expected that many of those travelers would be Canadians who would cross the border for cheaper airfares; but Allegiant hasn’t yet announced where the airline will fly from Ogdensburg (its specialty, according to its website, is taking passengers from their “favorite small cities to world-class destinations”, which include Hawaii, Las Vegas, Florida and Reno.) It operates in 98 cities, including Plattsburgh and Syracuse, using aircraft that can seat 156 to 223 passengers.

The deal with Allegiant is part of a bigger push to make the little Ogdensburg airport, which currently offers Cape Air flights to Albany and Boston on nine-seat Cessnas, more of a player. The OBPA is also planning to expand the airport’s runway and has announced a four-year incentive program to encourage more commercial airliners to come to Ogdensburg.

Local leaders are over the moon about the plan, according to today’s Ogdensburg Journal, and are hoping the deal, which the paper says could start in “as little as two years,” could help create economic growth throughout the region. Councilman William Hosmer, for example, told the paper “I see this only as a positive. I think we’re on the brink of doing great things in Ogdensburg.” Councilman Daniel Skamperle went one better, describing the deal as “awesome”, and said he’d “love to have I-98 as well.”