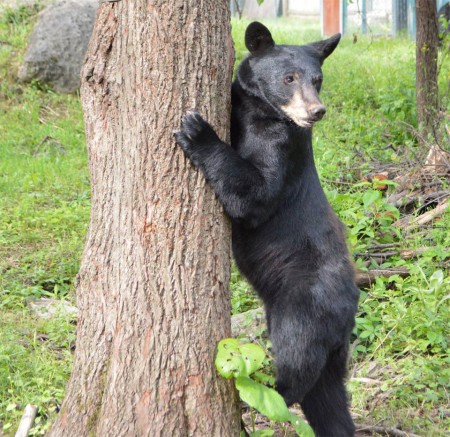 One of the two new bear cubs. Photo via Facebook

I love bears, so you don’t know how excited this makes me. Basically, my entire life has been a lead up to the moment in which I get to hold one (as long as the mama bear isn’t around).

The Watertown Daily Times reports that the two female cubs were given to the zoo by the Montana Fish, Wildlife and Parks agency.

The cubs arrived at the zoo in mid-March (more information is on the zoo’s Facebook page).

WWNY-TV reports that after they spent some time in quarantine and acquainted themselves with the zoo staff, the bears are now sharing an exhibit space with Tess, the zoo’s three year old bear cub who has lived at the zoo for about a year.

Although the American black bear is the smallest of the three bear species found in North America, this type of bear is widely distributed throughout North America from Canada to Mexico and resides in at least 40 states in the U.S.

Historically, the American black bear occupied nearly all of the forested regions of North America. But in the U.S., this kind of bear has for the most part been restricted to more secluded forested areas.

To celebrate the bears’ arrival, the zoo will host its first annual Teddy Bear Picnic on July 12 from 10 a.m.-4 p.m., with loads of bear-themed activities. On this day, the zoo will offer discounted admission to children who bring their teddy bear. For more information, check out the zoo’s website.

If you can’t wait until you can get to Watertown to see the bears, here’s a video of the two ladies from the Watertown Daily Times. Enjoy!