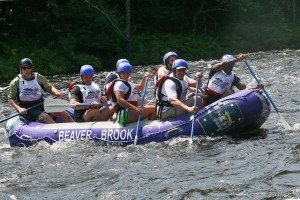 Sorry. Anyway, Gov. Andrew Cuomo’s office has just now announced details of this year’s Adirondack Challenge, a daylong event to be held this Sunday to promote Adirondack tourism. You might remember last year’s challenge, when Cuomo faced off against then-NYC Mayor Mike Bloomberg.

So here below are the details. Anyone want to bet on who’s going to pop his or her team’s raft? Or who’s an expert rafter? North Country Sen. Betty Little will be captaining the NYS Senate Republican Conference rafting team!

As part of the Challenge, Governor Cuomo will be participating in whitewater rafting Vermont Governor Peter Shumlin, and numerous state and local officials and tourism industry representatives.

“The Adirondack Challenge is about highlighting the beauty and recreational opportunities available to visitors of the region, and New York’s second annual challenge will showcase everything the Adirondack’s has to offer like never before,” Governor Cuomo said. “Last year we set the bar high with a Challenge that drew a variety of tourism industry representatives, business leaders, and elected officials, and this year we are going even further.”

Governor Cuomo’s whitewater rafting team will include Sandra Lee and his daughters.

Additional rafts competing in this year’s Challenge include:

In addition to whitewater rafting, the 2014 Adirondack Challenge offers participants the opportunity to go golfing, hiking, fishing, paddle boarding, canoeing, kayaking, or take part on an Adirondack motorcycle ride. A Taste NY reception is also being held to highlight the many world-class food and beverage products that are made by local vendors.

Other participants in this year’s challenge include:

In 2012 alone, tourism in the Adirondacks Region generated $1.24 billion in direct spending and $152 million in state and local taxes. This economic sector was integral to the region, attributing for 13,890 jobs, 17.9 percent of all employment in the region, and $332 million in labor income.