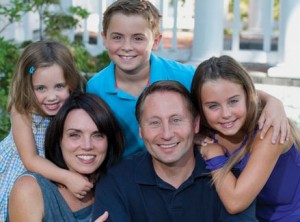 Rob Astorino (center) wants to replace Andrew Cuomo as New York’s governor. But a lot of New York voters aren’t even giving him, or his Republican Party, a serious look. Photo: Astorino campaign

The last couple of years, the Democratic Party in New York has been hammered with ethics and corruption scandals. It’s not a new phenomenon, but the drum beat of allegations, prosecutions and convictions is so steady that Governor Andrew Cuomo found himself joking about it in an interview with public radio’s Susan Arbetter.

“Seems like every week there’s another open seat, given the travails of our friends in the legislature,” Cuomo laughed. The joke boomeranged this summer when the New York Times’ three-month investigation found that Cuomo’s own staff had intervened directly in the anti-corruption Moreland Commission, with the newspaper concluding that Cuomo’s office “deeply compromised the panel’s work.”

Federal investigations are now underway, but one curious phenomenon is becoming more and more clear: Despite the Democratic Party’s shoddy track record for self-policing and purging its own miscreants — including those politicians accused of severe sexual harassment — Republicans have failed to make gains in the polls.

After weeks of brutal press and his own clumsy responses to the scandal, Governor Cuomo is still beating Republican challenger Rob Astorino by nearly 30 points. “Is the governor’s race all over? Did it ever start?” Quinnipiac pollster Mickey Carroll said in a statement.

The bottom line is that the GOP has become almost completely marginalized in statewide politics. The party doesn’t hold a single statewide office and seems incapable of mounting a serious challenge for those positions.

Aggressive gerrymandering and some skillful political maneuvering in Albany has allowed Republicans to cling to a fragile quasi-majority in the state Senate, staving off complete irrelevance, but even in those races voters statewide prefer Democratic politicians by wide margins. (When you add up all the votes cast in state Senate races, Democrats garner significantly more support.)

This is deeply problematic, and Republicans have no one to blame but themselves. There is no reason that the party of Teddy Roosevelt, Nelson Rockefeller, Alphonse D’Amato and George Pataki shouldn’t be able to provide a credible, coherent alternative for voters, particularly when Democrats are busily shaming themselves in Albany.

Unfortunately, the GOP has steadily eroded its own popularity with average New Yorkers while falling into a deadly cycle of feuds and embraces with the Conservative Party and the Tea Party. Rather than producing a sound, detailed plan that would attract a wider base of support, Republicans continue to be wooed by national red-button issues that just don’t play well in the Empire state, from gun rights to opposition to gay marriage to hostility to Obamacare.

Republicans have also failed to embrace the reality of a multi-cultural and multi-ethnic New York. Instead of recruiting candidates of color, bringing blacks, Hispanics and Asians into leadership posts, and developing issues and ideas that address the problems of minority voters, too many GOP leaders have continued to rely on old narratives about “Upstate vs. Downstate” and “New York state versus New York City.” Everyone understands what those code-phrases mean. We get how the battle lines are drawn.

But the demographic imperative for abandoning that fight is clear. Only 70% of New Yorkers are white. That’s ten percent fewer than in the nation as a whole and the numbers of whites are certain to dwindle rapidly census by census. If Republicans hope to compete, and provide a viable choice to voters, they need to end their reliance on one demographic group as a base of support.

The alternative is what we’re seeing now. Even when significant questions are being raised about the Democratic leadership, their ideas, their ethics, a majority of New York voters simply don’t see the GOP as an option. It may be that scandals and outrages will grow serious enough by November to change that in 2014, but I’m skeptical.

Rob Astorino has proved himself to be an able campaigner. He’s a veteran politician with some interesting ideas. Voters should be giving him a serious look. But right now, the burden of his party’s brand is just too heavy. Forced to choose between a candidate like Cuomo, now viewed by many as flawed, and a Republican Party viewed by many New Yorkers as flatly unacceptable, a lot of voters don’t see any choice at all.

One candidate can’t change that dynamic. But the GOP’s leadership needs to go to the mountaintop and think hard about its values, its message, its demographic appeal. It’s not enough to wait around and hope that the Democrats will continue blowing themselves up. Republicans need to once again become a credible, familiar, viable choice for all New Yorkers, from the Bronx and Brooklyn to Buffalo and Plattsburgh.