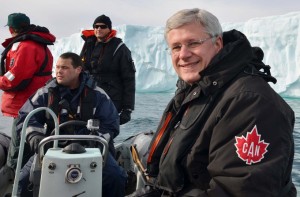 He goes to wave the flag and bolster territorial claims in the area. He goes in anticipation of a coming boom once resources and shipping are more accessible. And many think he goes from a genuine respect for the history and potential of the far north.

On tour, or back in Ottawa, what Canada’s most important political figure seldom discusses is a little thing called climate change. Which is odd, considering how the Arctic absolutely, utterly proves that something big is happening to our planet.

Particularly in the U.S., one can still get arguments about the cause of receding glaciers, changes in sea ice, and shifts in weather, animal and plant life. But in the Arctic, it’s virtually impossible to deny major changes are happening, often even faster than initially predicted.

Residents there know that first-hand. The Arctic Rangers, a mostly-indigenous civilian reservist force that patrols the region, say nearly everything is changing. As reported by the Canadian Press:

“The elders used to be able to predict the weather by looking at the clouds; they can’t do that anymore. You can’t predict the weather anymore,” was a typical comment on the impact of climate change, which has reduced snow cover, led to earlier springs and generated fiercer winter winds.

Snowmobiles are becoming less available as the snow disappears, making it harder to travel.

“We never used to have forest fires. Now we have more and more each summer,” said one participant.

“There are new species now like small birds, ducks, salmon, foxes, grizzlies and an unknown species that is a cross between a polar bear and a grizzly,” said another. “We never used to see any of these species before.”

“Polar bears used to be fat and tasty,” said one ranger. “They taste different now.”

And the Arctic is no longer a natural refrigerator for the hunt, said some.

“When we are on the land and living in tents, we dig holes to put the carcasses in to keep them frozen. Now even six feet down it is not frozen.” 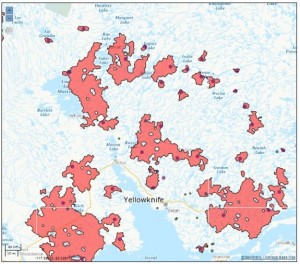 Natural Resources Canada map of estimated burn sites near Yellowknife NWT, toward the end of the 2014 fire season.

CBC news reports the fire season has been unusually bad in the Northwest Territories this year:

The worst forest fire season in decades has ravaged about 33,000 square kilometres of land — an area larger than the size of Vancouver Island.

Most of the destruction has been in the North Slave region, where Alfred Arrowmaker hunts and traps.

“I went out weeks ago, looking for moose, and there was nothing there. Everything is burned. There is absolutely nothing out there,” Arrowmaker says.

“I have lived in Gameti my whole life, and I have never seen this kind of fire in my life before.

Problem one is improving the many frustrations and poor conditions still faced by Canada’s indigenous populations. And, as Den Tandt put it,

The second elephant in the room is, of course, climate change. In the Arctic this is neither debate nor symbol; it is a fact on the ground. Moreover, it’s one the government clearly recognizes, at least in deed. The opening of northern sea routes now in its infancy underpins virtually every aspect of the Harper government’s Arctic strategy, from the search for the Franklin ships, to the need to project sovereignty northward, to the military’s Operation Nanook on Tuesday, which envisioned a tourist ship running aground in York Sound, near the Davis Strait.

None of this would be happening were it not for the gradual withdrawal of the summer ice. Climate change is a fundamental to the emerging geography of the Canadian Arctic. And yet, the two words “climate change” were not uttered a single time over the span of six days, by the PM or any of his ministers, that I am aware of. At this late juncture, with the Arctic so central to their plans, that is simply astonishing.

Readers who are still with me are probably interested in the Arctic as a region. So I wanted to call attention to a fascinating article in the New York Times on the mystery of what happened to the Dorset, an Arctic people who survived well in isolation for 4,000 years before vanishing about 700 years ago.

The article concerns a new study published in Science Magazine this August “The genetic prehistory of the New World Arctic” which examined DNA evidence to conclude the Dorset were not absorbed into surviving populations.

Researchers feel the Dorset likely had problems caused by their too-isolated gene pool. But the coup de grâce may have been environmental, according to New York University professor Todd R. Disotell (who was not part of the DNA study):

Another possibility, Dr. Disotell explained, is that the Dorset braved generations of harsh tundra conditions only to succumb to the effects of climate change. In the Arctic, even minor shifts in temperature can devastate marine life, cutting off vital food sources. The archaeological record, in fact, suggests that several such events had nearly wiped out the Paleo-Eskimos before.

“When you’re dealing with sea ice, just a few degrees can be transformative,” Dr. Disotell said. “Three bad winters in a row where you can’t hunt seals, and you’re in trouble.”

Of course, some will seize upon the fact that climate has changed – dramatically – long before humans were burning carbon counts as another challenge to today’s understanding of global warming and its causes.

But maybe the salient point is this: climate change matters. Argue all you like about what causes it. Just admit that some of these shifts become issues of survival. 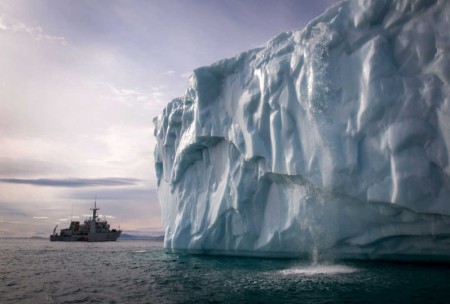