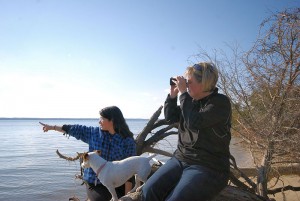 Remember the scandal in the U.S. over IRS scrutiny of non-profits with possible ties to Tea Party-type movements?

Well, Canada has its own version of that, according to some environmental organizations who feel they have been targeted for hostile inspection by Revenue Canada.

The latest such example comes in the form of  the Kitchener-Waterloo Field Naturalists. A birdwatching club, if you will, though they care about other wildlife too. Here’s the group’s mission statement:

TO acquire and disseminate knowledge of natural history.
TO protect and preserve wildlife.
TO purchase and hold appropriate parcels of land for the advancement of conservation.

TO support public interest in nature and its preservation by supporting the enactment of wise legislation and by other means as falls within the scope of the Corporation.

That may not sound very political or dangerous. But some would say that environmentalism has become politically fraught in Canada, because so many environmentalists oppose stances taken by the current conservative government.

As reported by the CBC:

The Canada Revenue Agency launched a special program of so-called political activity audits after Budget 2012 provided $8 million for the project, later topped up to $13.4 million.

The rules say a charity can devote no more than 10 per cent of its resources to political activities, and none to partisan activities, but critics say the guidelines are fuzzy or can be Byzantine in their complexity.

A special squad of 15 auditors has so far targeted some 52 charities, many of them critical of Conservative government policies. Environment groups were hard hit in the first round in 2012-13, but the net has since widened to snare social justice and poverty groups, among others.

So far, no group has been deregistered, but the audits have been expensive and disruptive for charities, many of which operate on a shoestring.

According to media reports, earlier this year the Kitchener-Waterloo Field Naturalists got a letter from tax auditors that found no violations but sternly cautioned against exceeding limits on political activity.

The club has chosen to refrain from public comment. But at least one member has not. Writing in The Record.com, Roger Suffling concluded the audit was linked to the group’s concern about neonicotinoids, insecticides implicated in bee and butterfly decline:

Last winter, the directors of our naturalists’ club — the Kitchener-Waterloo Field Naturalists — voiced concern to then federal Agriculture Minister, Gerry Ritz, about the impact of these new insecticides, whose use the European Union has suspended. We added footnotes and references: We wanted our little club to be taken seriously. And we were.

Federal Minister for the Environment, Leona Aglukkaq, replied on March 14. We had our response, and we weren’t happy with it, but that is how democracy works, right?

Wrong. On almost the same day, we received a March 11 audit from the Canada Revenue Agency (CRA). Thus I take no comfort in the late finance minister Jim Flaherty’s statement that “we don’t choose who is audited by the CRA. That’s up to the CRA”

Though the detailed, five-page letter determined that our club was in compliance, the auditor concluded ominously: “We trust that (the club) will take appropriate action … including refraining from undertaking any partisan activities. This letter does not preclude any future audits.” (My emphasis).

Though he speaks for himself, Suffling is an adjunct professor at the School of Planning at the University of Waterloo. Here is his “take away” from the whole experience:

The local naturalists club was silenced when its views became known to government and it was silenced for voicing public concern, not for breaking the rules. How many other inconvenient charities are there out there?

I suppose this issue is two-fold. The first question would be: Is there societal agreement that non-profit groups should limit political activity? If so, then how should that be policed?

Because Tea Party organizations and bird watchers can probably agree on this: upholding rules is one thing. Selective harassment is another.

9 Comments on “Ontario birdwatcher group targeted for being too political?”