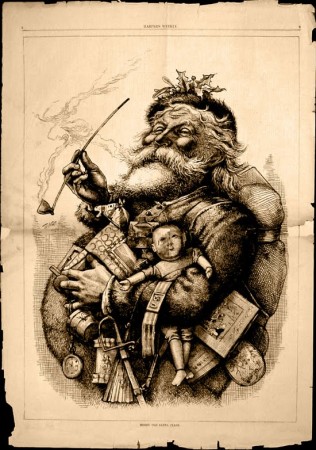 Santa won the war. Our popular image of Santa Claus in America was created in part by Thomas Nast, the crusading political cartoonist in the 1800s.

For reasons completely unrelated to the Holidays, and the Christmas season, I’ve been deep-diving of late into the history of England and the American Colonies in the 1500s and 1600s.  It’s a fascinating time, full of amazing larger-than-life characters.  One finds deeply flawed men like Henry VIII and Thomas Cromwell, and powerful, daring women like Queen Elizabeth and her mother Anne Boleyn.

But woven through the drama of that period is something that took me by surprise — the savage depth of religious animosity and violence that swept England for more than seven decades.   To put that weary, bloody chapter in context, our own Civil War lasted for only about five years.

How this involves Christmas, I’ll get to in a moment, but first some needed context.

The festering religious trouble in England came to a head in 1529 when Henry VIII embraced a clumsy sort of half-Protestantism, after breaking with the Pope.  Henry wasn’t on board with the Lutheran reformation that was sweeping parts of Europe.  He just wanted control over the Church in England and he desired the freedom to marry and divorce on his own whim.

But that power play was enough to send shock waves through a society that had been solidly Roman Catholic for centuries.  In the decades that followed, a brutal level of Christian-on-Christian violence defined the age.

In Peter Ackroyd’s history of the Tudor dynasty, he describes mobs of Christians looting one-another’s churches and shrines.  They burned Bibles, they destroyed altars, they desecrated holy statues and icons.  The great abbeys of England were broken up, their land and treasures looted.

Eventually, the violence escalated to the point where Protestant leaders were killing Catholic priests and monks.  When Roman Catholic leaders took the throne once again, they in turn murdered Protestants.  Wikipedia’s list of Protestant “martyrs” put to death under Queen Mary runs to nearly 300 names.

Most of those killed were made to suffer horribly.  We think of witch burnings as a strange aberration in English society — and in the English colonies of America.  But in fact during this shameful period it was commonplace for Christians to set fire to those fellow humans whose beliefs differed from their own. It was considered an act of particular mercy to allow the “heretic” being burned alive to dangle a bag of gunpowder around their necks in order to hasten the moment of death.

Most of the killing done during those terrible decades didn’t involve the celebration of Christmas.  Most involved other doctrinal differences, including the question of whether the bread and wine served during the Catholic mass actually transformed into the body and blood of Jesus Christ.  (Catholics believed yes, most Protestants, no.)

According to accounts of the period, Christmas remained formally outlawed or taboo in much of New England for the better part of 200 years.  A law passed in Massachusetts in the 1650s imposed a civil fine on anyone wicked enough to celebrate the day. This was part of a larger pattern.  During this period, Christians in North America regularly killed or banished one another for holding non-conformist views about faith.  Rhode Island came into existence as a separate colony in large part because religious leaders in Massachusetts needed somewhere to dump those inconvenient souls who didn’t share their religious views.

How we rediscovered and reinvented Christmas

So when did we Americans begin to embrace the Christian holiday?  Surprisingly late.  Some historians suggest that even up to the Civil War, in the 1860s, Christmas remained a marginal holiday at best in much of the US, especially in New England where Puritan influences remained.   But in the 1800s, more and more Roman Catholics immigrated to the U.S.  At the same time, popular stories by Washington Irving and Charles Dickens began to spread the notion that Christmas — even with all the pagan and supernatural elements that so infuriated some Christians — could be celebrated and enjoyed without doing harm to one’s soul.

It is a particular irony, given the long centuries of Christian persecution of Christmas, that secularists are now so often blamed for making war on the holiday.  In fact, much of the holiday’s charm was invented or at least augmented by non-Christians, or by Christians working under distinctly non-Christian motivations — usually trying to make money.  Indeed, many of the trappings of this holiday season were cooked up in the 19th or 20th centuries by jingle writers, ad men, journalists, and popular fiction writers — certainly not by clergy or by Christians driven by devoutness.  Many of their most popular inventions were exactly the kinds of non-Christian fun and fluffery that would have infuriated Christians during the times of persecutions.

Santa Claus himself, in his modern guise, is a “jolly old elf” — not a stern, Catholic saint — one whose image has been burnished by commercial illustrators, beginning with Thomas Nast and continuing with the classic Coca Cola illustrations of the 1930s and 40s.  One source that I found on-line (I’m on sketchy ground here, but here’s the link) argues that as many as 12 of the top 25 favorite American Christmas songs were actually written by non-Christians, most of them Jewish.

So is there a war on Christmas in modern times?  I can’t find any evidence that there is.   This is debatable, of course, but the whole mess seems like a particularly cynical act of staged political theater, one which requires its audience to have very little understanding of American history, of Christmas traditions, or of Christianity itself.  One thing is clear, however.  One faction in the real Christmas Wars that raged among Christians from the 1500s through the 1800s won decisively.  The Roman Catholics and their allies who loved and celebrated Christmas from the start eventually charmed the rest of us over.  They made the holiday so inviting and fun that even many of the dourest churches — and even lots of non-Christians — eventually joined in with a glee that would make our Puritan ancestors shudder.

23 Comments on “Remembering the real war on Christmas”