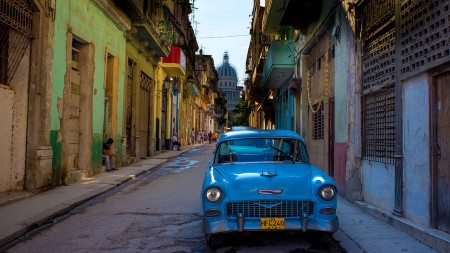 Old American car in Havanna with the Capitol in the Background. Image: Severin.stalder, Creative Commons.

Headlines are supposed to be simple attention grabbers, without words that throw the reader off. But “rapprochement” is just the right term for what’s been announced. As defined by Merriam-Webster, it means “the development of friendlier relations between countries or groups of people who have been enemies”.

This past week, U.S. President Barack Obama and Cuban President Raúl Castro surprised many with news that diplomatic relations will be normalized. (Read/hear both announcements here, from President Obama and President Castro.)

Fully lifting the embargo that dates from 1960 would require further Congressional action. But this news represents a huge shift in a major geo-political deadlock.

The unsung supporting players for this development are reported to include Pope Francis and Canada.

While Canada is usually thrilled to be a player on the world stage, this case is slightly awkward because the current government has been a vocal critic of the Castro regime.

Even while criticizing political repression in Cuba, Canada has long favored (and practiced) relatively  normal relations with that nation, often to great displeasure in U.S. circles.

Many of the secret talks (labeled “indispensible” by senior Obama administration officials) that lead to this major announcement were held in Canada.

As reported by Stewart Bell for the Ottawa Citizen:

“Canada was pleased to host the senior officials from the United States and Cuba, which permitted them the discretion required to carry out these important talks,” Prime Minister Stephen Harper said after the surprise announcement.

On friendly terms with both nations, and trusted not to leak news of the delicate talks, Canada was uniquely placed to host the delegations, said Prof. Dane Rowlands, director of the Norman Paterson School of International Affairs at Carleton University, Ottawa.

Prime Minister Stephen Harper was asked about Canada’s role in a major year-end interview on CBC. On Cuba, Harper had this to say:

“I think that’s an economy and a society just overdue for entry into the 21st century. Time will tell, but I think probably when the current generation of leadership passes you’ll see some changes,” Harper said.

The prime minister added that he looked forward to seeing democratic elections in Cuba.

“This is really the only place where there are elections that are completely non-competitive. And it would be nice to see that happen in Cuba and I think eventually it will.”

Opposition leaders in Canada welcomed the development too, as recounted by the Ottawa Citizen.

“I thank our Canadian diplomats for their hard work on this file,” NDP foreign affairs critic Paul Dewar said in a statement. “This is what diplomacy looks like, and Canada is very good at it. Today is a great day for those who believe in engagement as the most effective tool of diplomacy.”

The downside for Canadians may come in terms of having to share what had been a semi-exclusive Caribbean get away spot with throngs of eager Americans.

The Ottawa Citizen reports Canadians make up 36% of tourists in Cuba. Indeed, Cuba is Canada’s third most popular travel destination after the U.S. and Mexico. More than a million Canadians traveled to Cuba 2012 alone, contributing an estimated $748 million to the Cuban economy.

This Toronto Star article suggests the entry of American tourists could diminish the Canadian tourist experience there.

Jury Krytiuk, head of the Cuban travel department at Toronto-area agency A. Nash Travel Inc., says an affordable vacation in a relatively pristine landscape will be harder to come by in the years to come.

Prices will surge as restrictions on American travellers ease, he said, adding Cuba will also have to adjust its tourism infrastructure to accommodate an influx of new visitors.

“There’s a limited amount of accommodation, so there’s going to have to be a lot of hotels built, especially in the cities, to accommodate people who want to visit,” Krytiuk said in a telephone interview.

The Washington Post put all that in this headline: “Great news, America: Canada says you’e going to like Cuba”

The New York Times had this Q & A on “How Travel to Cuba May Change“. The article says it’s too early to know what shifts will come, or when. But interest is decidedly keen.

30 Comments on “Canada’s role in the U.S./Cuba rapprochement”