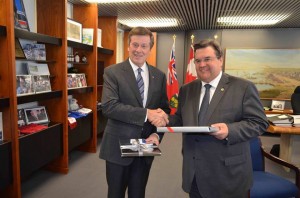 Indeed, in the case of Congress, everyone is tearing their hair over institutional gridlock, even while both parties seem unwilling to change that maddening state of impasse.

In contrast, more and more cities seems to be moving toward a non-partisan governance.

Besides difference of political orientation, old regional divides are often falling away as those charged with making cities work seek commonality as a political block with its own pressing needs.

All of those things – and more – are on display in a recent announcement that the mayors of Canada’s two largest cities, Toronto and Montréal, plan to work together on common interests. The “and more” part of this new partnership reflects a new desire to drop historic…what should be said?…differences? Antagonism? Cultural contempt?

The gap between English Canada (capital city Toronto) and French Canada (Head quartered in Montréal) had been wide enough to coin a phrase for it, “the two solitudes”.

Well as of now, teamwork is the new watchword for Toronto Mayor John Tory and Montréal Mayor Denis Coderre. Both plan to work together for more Federal investment in cities and more international investment.

Coderre said as much at a press conference in Toronto Wednesday morning: “The two solitudes are over.” Even as a federal election looms for Canadians, these two mayors want to steer clear of partisanship, as reported by the Montréal Gazette:

“Been there, done that, got a T-shirt,” said Mr. Coderre, a former Liberal MP, alongside Mr. Tory, a former leader of the Ontario Progressive Conservatives. “What we’re looking for now, though, is some investment, we are looking for answers. We will do it in a respectful way, but when everybody sticks together, you know, we have a saying in French, it’s not the size of the axe that matters, it’s the strength of the swing.”

CBC news says these leaders want this trend to grow:

The two mayors said they were forming alliances all over Canada, with Calgary, Halifax and Vancouver.

“In this very complicated and very competitive world, we are going to gain more … on behalf of building a strong Canada by working together,” said Tory. “Teamwork is going to produce wins.”

It is interesting to watch cities work toward alternative paths in the world of politics.

If partisanship is the problem, is non-partisanship the answer? Or is there more to it than that?

1 Comment on “Ditching divides: Toronto and Montréal will try teamwork”