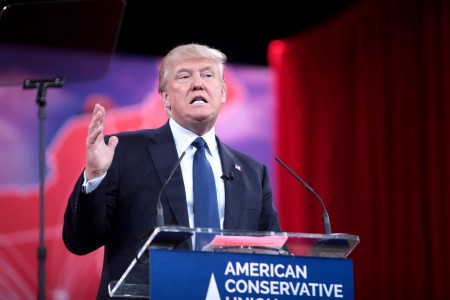 If you want a quick snapshot of just how dangerously broken the Republican Party has become, look no further than the internal memo from top GOP strategist Ward Baker leaked to the Washington Post. It offers a glimpse of a party establishment frozen by fear in the no man’s land between its hunger for victory in 2016 and its realization that Republican front-runner Donald Trump is a disaster, a man Baker portrays as unfit to lead the world’s most important democracy.

Along the way, Baker’s memo, circulated in late September, takes cynicism to its purest form. On the one hand, he urges Republican candidates to strive for authenticity, to portray themselves as courageous, committed to reform, good government, and change. But he also urges them to find ways to accommodate and co-exist with Trump, a candidate Baker describes as a “misguided missile” who is subject to “farcical fits.”

The document actually begins with a capitulation. It doesn’t argue for Republicans to do their duty by fighting to derail the candidacy of a man Baker clearly views as unsuited for the nation’s highest office. Instead, it accepts the possibility of a Trump victory as a fait accompli. “The place is Cleveland, Ohio,” the memo reads. “Donald Trump has just accepted the nomination of the Republican Party to be it nominee for President of the United States.”

Baker goes on to acknowledge Trump’s “extreme” positions. He accepts that Trump says “wacky things about women” and (apparently assuming that his party’s candidates will be men) he suggests that politicians should be prepared in advance to say that their “wife or daughter is offended by what Trump has said.”

Again, to be clear, this is a memo written not by Democrats or liberals or by the mainstream media. This is a memo written by the guy tapped by Republicans to coordinate the political fight to build their majority in the United States Senate. This is one of the GOP’s most powerful officials. And he’s saying point-blank that Donald Trump is someone that he expects to make “outrageous statements.”

Baker does one last thing in his memo that’s worth noting. He compares Trump repeatedly to Wendell Wilkie, a dark horse Republican candidate who stole the nomination in 1940 and then ran unsuccessfully against Franklin Roosevelt. But the comparison only works if you strip the two men of any substance or values. Trump is a guy, as Baker sees it, who says farcical, untrue, and offensive things as a matter of course.

Wilkie, on the other hand, was a man of actual courage who tried to steer his isolationist party toward early support for the Allies in World War II. At a time when the GOP wished to leave Britain to fight the Nazis alone, Wilkie campaigned on his conviction that America has an important role to play in a dangerous world. He was also a pioneer of the civil rights and civil liberties movement within the Republican Party.

In comparing Trump to Wilkie, Ward Baker steps firmly in the gray mess of frightened and valueless political calculation that ails establishment Republicans. If, as he suggests, party leaders truly believe that Trump is temperamentally unsuited to serve as commander in chief, then Trump is not like Wilkie at all. And authentic, courageous GOP candidates shouldn’t need a seven-page, lawyerly memo to understand their duty.

16 Comments on “Republican woes deepen in the Age of Trump”