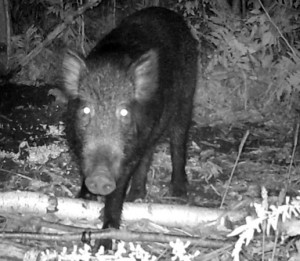 Back in January, NCPR’s Brian Mann reported on the feral pig problem in the North Country. The story garnered a lot of comments, probably because of its juicy headline–“Feral Hogs Invade Champlain Valley, Adirondacks”–and creepy pictures.

The idea of hogs-gone-wild may elicit a chuckle from those of us who aren’t plagued by the unwanted creatures. But their rapid proliferation across the eastern Adirondacks has serious repurcussions for the ecosystem.

“There’s a real sense of urgency,” said Ed Reed, a wildlife biologist for the state’s Department of Environmental Conservation. “Once the pigs get established, they are very difficult to eradicate completely.”

The solution: trapping the pigs, and allowing hunters with small game licenses to shoot, keep, and kill all the feral swine they want. But farmers and wildlife conservationists alike are worried. Feral pigs are a nemesis not to be taken lightly:

“They eat everything,” Mr. Reed said. “They’ll eat the understory in a forest and dig up plants by rooting the ground for insects and roots. They compete with wildlife for food. They’re the most destructive mammal out there.”