In the “oh no!” department, the New York Times is reporting that the Encyclopaedia Britannica is going out of print. This was first published in 1768. For old fogies, at least, the loss marks some sort of watershed. 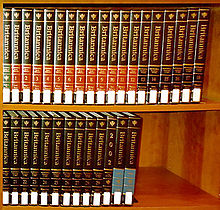 The 15th edition of the Britannica. Image source?--Wikipedia

Here’s how the NYT article described the shift:

The last edition of the encyclopedia will be the 2010 edition, a 32-volume set that weighs in at 129 pounds and includes new entries on global warming and the Human Genome Project.

“It’s a rite of passage in this new era,” Jorge Cauz, the president of Encyclopaedia Britannica Inc., a Chicago-based company, said in an interview. “Some people will feel sad about it and nostalgic about it. But we have a better tool now. The Web site is continuously updated, it’s much more expansive and it has multimedia.”

My parents had an old, post-war set of World Book Encyclopedias. From infancy, I would happily sit beside the bookcase and create small mountains of volumes, flipping through the photos and diagrams, trying to remember where to find my favorites. (Which was a challenge before I could read or alphabetize!) I gather encyclopedia diving was a hobby shared by other bookworms too. (And thank you Mom and Dad, for letting me have that pleasure.)

In high school I bought a used set of Encyclopaedia Britannica, 15th edition which (as described by the EB entry)  “consisted of 28 volumes in three parts serving different functions: the Micropædia: Ready Reference and Index, Macropædia: Knowledge in Depth, and Propædia: Outline of Knowledge.” It turns out I really didn’t like that system. It was vexing to have to jump from volume to volume, and cross-indexed entries. (Editions matter!)

Those linear feet of heavy books ended up staying at my mother’s house until just a year or so ago, when she and I were feeling ruthless during a re-organization campaign. Off they went to my brother’s neighbors, a household with school-age children.

I imagine encyclopedia sets are a real generational marker. Readers under 20 (30?)  might not even know what I am talking about! Who needs encyclopedia at hand when the internet offers everything and more?

Clearly there are pros and cons to both models. The old way was slow and stodgy, if “authoritative.” The new way offers access and immediacy, while leaving accuracy open to debate.

Encyclopaedia Britannica is not gone, it continues as an on-line resource. And I understand World Book still sells “real” encyclopedia. But the days of full sets may be numbered.

What’s your take on how knowledge is organized, vetted and shared? What sources do you consider authoritative?

10 Comments on “Encyclopaedia Britannica ends print editions – does anyone care?”