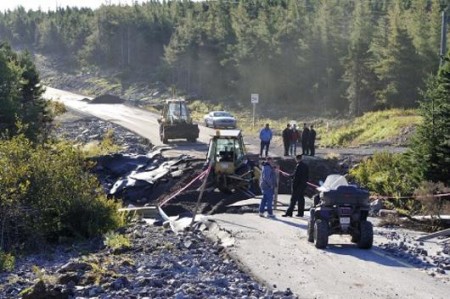 When disasters strike – such as the Ice Storm of ’98 – sometimes there’s a silver lining. A groundswell of compassion, cooperation and tangible assistance. Everyone pulling together, being their brother and sister’s keeper.

But when it comes time to pay for it all, that cohesive spirit can fray.

States that bore the brunt of “Super Storm Sandy” got a rude shock when Congress failed to respond as usual with quick and sizable funding for recovery efforts.

Perhaps Sandy was just a case of poor timing. It was decidedly unwise to have a major disaster in the midst of a protracted political stalemate and a national fiscal crisis. That’s the thing about natural disasters, though. They happen when they happen, regardless of whatever else humans may be up to, or up against.

Here in Canada there’s been a kerfuffle over the discovery that the Department of National Defence (DND) is considering charging communities for disaster relief, when the Canadian Forces get called in to help, and so forth. (Note: “Defence” is spelled with a “c” in Canadian English.)

Apparently, the DND has always had the authority to bill for services. But, for the past 15 years anyway, this has not been done.

This discussion was sparked by recent revelation of internal DND briefing notes that propose to end to “free” help.

Reaction, on the whole, has ranged from negative to scathing. After all, the thinking goes, taxpayers already provided every single cent of funding for the DND and Canadian Forces in the first place. (With the elimination of the penny here in Canada, perhaps that phrasing should be provided “every nickel.”)

Here’s how columnist Michael Den Tandt put it in this National Post commentary:

…it is ludicrous – not to mention politically untenable and wrong – to suggest that the military should begin “charging” Canadian municipalities, provinces and other government departments for its services. What planet can the Department of Defence’s administrative gnomes be on?

The DND doesn’t really seem ready to defend this proposal, which was reportedly developed last July. According to this article by David Pugliese for the Ottawa Citizen:

The Canadian Forces can’t say what criteria it will use to charge provinces and municipalities if they need help in an emergency or during disaster.

It also can’t say whether it will be able to provide local governments with specific costs in advance for the various services it can offer so provinces and municipalities can decide whether they can afford to call in the military to help fellow citizens.

Was it all a misunderstanding? Or is retrenchment afoot? By Thursday, Defence Minister Peter MacKay had this statement:

The Canadian Armed Forces has always been, and remains, ready and able to assist Canadians at all times. As Minister of National Defence, my greatest priority is ensuring the safety and well-being of all Canadians.

‪I stress two things.  First, there has been no change in Department of National Defence ‘s policy regarding cost recovery; and second, the policy relates only to recovery of costs from another federal department, such as Public Safety, when it requests that Department of National Defence / Canadian Armed Forces provide assistance to a province, municipality, or other eligible entity.  ‪Decisions regarding cost recovery from another federal department are made on a case-by-case basis.

Postmedia News parliamentary reporter Lee Berthiaume did much of the lead work on this story. By week’s end he wrote about more signs of an about-face:

…on Friday, a spokeswoman for Defence Minister Peter MacKay indicated the government has reversed course.
“It is not the federal government’s intention to bill provinces or municipalities for Armed Forces assistance during natural emergencies,” Paloma Aguilar said in an email.

Criticism and protestations aside, I imagine the DND is wrestling with difficult choices. On a gut level, providing practical service is a big reason people take an oath and put on a uniform. They are trained to get things done. They want to help. The Canadian Forces have earned broad public admiration for that can-do spirit.

Meanwhile, on an administrative level, the DND is under budget constraints beyond their control. If department funds are fixed – and shrinking – where do they recoup the costs of helping in a flood or ice storm? (And, of course, some policy decisions are political, made by elected officials, to whom the DND reports. It can be hard to know where some ideas come from, or where the buck actually stops.)

To some extent, this is about budgets and accounting. Because ultimately, apart from insurance claims or donations to organizations like the Red Cross, disaster relief comes from taxpayers.

Of course, it’s always easier to expect funds to be found in some other budget. Hence municipalities look to the province or state, which in turn look to the federal government for a deep-pocket bail out.

Once upon a time, it probably seemed like there was a way to tap into disaster relief as if it was a large pile of free money. But with every level of government feeling the strain of fiscal shortfalls, the pinch is on.

I suspect most Canadians just want one-stop billing. If rivers burst their banks and the army gets called out to fill sandbags and deliver bulldozers, let the feds pick up the tab. Bouncing invoices back and forth is just so much inefficient paper-pushing and double-handling.

But Canadians (and Americans) may be facing unhappy new realities.

In the current fiscal climate, paying for clean up in one region is going to require painful cuts somewhere else. There’s just not a lot of surplus to access anymore.

Many scientists say we can expect big weather disasters more often in the years ahead. What’s the plan for paying for that?

Thoughts and comments are always welcome.