Massive wildfires in Australia, exacerbated by unusually high temperatures. Snow in Jerusalem. Bitter cold in China and parts of Russia. 2012 ranks as the hottest year on record for the U.S.

While some still challenge the notion that climate change is cause by human activity, people around the globe do seem to be facing more and more “extreme weather events”.

This post comes out during a January thaw. Those are not unheard of. But the lack of enough deep cold to build solid ice here in the cold north is starting to seem unusual. (Or like the new normal, since it keeps happening!) As reported for NCPR by Karen Kelly, and the Ottawa Citizen, this is looking like another challenging year for good ice on the Rideau Canal Skateway.

And sometimes it’s the ‘ordinary’ things that suddenly seem like an unacceptable loss, such as outdoor skating and hockey.

A 2012 study caused a stir here in Canada when it stated conditions necessary for back yard ice rinks are in decline – and may be endangered – due to climate change.  (“Observed decreases in the Canadian outdoor skating season due to recent weather warming” by Nikolay N Damyanov, H Damon Matthews and Lawrence A Mysak)

Dimming prospects for good outdoor ice in most populated sections of this country hits Canadians where it hurts.

In 2012, scientists in Montreal warned Canadians to expect there will be fewer outdoor skating days in the future.* Their predictions are based on the results of data taken from weather stations across Canada over the last fifty years. In some parts of Canada, they warn there may one day be no more backyard rinks at all. Remember the story of how Wayne Gretzky learned to play hockey on the backyard rink his father made for him in Brantford, Ontario? The scientists’ report says some day that will no longer be possible – at least, not in Brantford.

This prompted a group of geographers at Wilfrid Laurier University to create RinkWatch. We want Canadians from coast to coast to coast to tell us about their rinks. We want you to pin the location of your rink on our map, and then each winter record every day that you are able to skate on it. Think of it as your rink diary. We will gather up all the information from all the backyard rinks across Canada, and use it to track the changes in our climate. The RinkWatch website will give you regular updates on the results. You will be able to compare the number of skating days at your rink with rinks elsewhere in Canada, and find out who is having the best winter for skating this year.

You may not think of it as science, but that’s exactly what you will be doing – making regular, systematic observations about environmental change in your own back yard. You will be joining a growing league of citizen-scientists from every province and territory in Canada (and hopefully some of our American neighbours as well). Is the backyard skating rink an endangered species? The first step in finding out for sure is to gather the statistics. If we want skate outside in the future, we have to find what’s going on today. So please, join RinkWatch, and help prevent backyard rinklessness.

This new effort, which is sort of like the long-running and useful Christmas Bird Count, is striking a chord in Canada. (Is there anything similar in the U.S.? Should there be?) 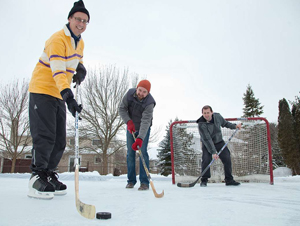 Robert McLeman is a geography professor at Wilfrid Laurier University and one of the founders of RinkWatch. In this blog post McLeman writes about what skating means to him and why he wanted to start the project.

No indoor ice surface can compare with a hard, cold, outdoor pond or a well-maintained neighbourhood rink. The sound your blades make as they scratch across real ice, your steamy breath hanging in the air, not going inside until you can no longer feel your fingers or toe – those are the best parts of a southwestern Ontario winter when you’re a kid, even one who is a crummy skater.

Speaking with the Montreal Gazette, McLeman says there’s value in taking this to the public-at-large.

“When you talk about climate change and global warming, it’s one of those big-picture ideas that people have trouble relating to on a personal or individual basis,” he said. “So we thought, let’s get kids and families to collect data about outdoor skating and use that as a bridge to pull them into citizen-engaged science.”

I heard an interview about RinkWatch on CBC Ottawa’s “All in a Day” this past Thursday. (That specific audio didn’t seem to be available when I wrote this post, but perhaps it will be posted later.) The speaker said the project is being well-received. Sometimes, after interviews like the one he was giving, the response overwhelms the server. (I’m pretty sure the person interviewed was McLeman, but I was driving and did not make note of the name at that time.)

So, there’s plenty of enthusiasm for outdoor ice in this part of the world. Even during a discouraging warm spell – like this one.

Perhaps this melt will be followed by enough cold for some really good ice after all.

Meanwhile, data from back-yard rink experts may lead to a better understanding of this particular challenge.