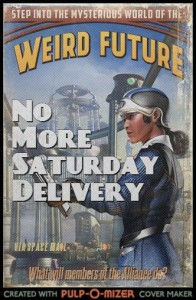 In 2013 and beyond, what’s the purpose of national postal service?

If that is still wanted, what are customers willing to pay, in terms of postage – or taxes – to keep those services viable?

When, where and how should those services be provided?

The recent announcement that the United States Postal Service plans to drop Saturday letter deliveries beginning in August made a big splash.

Some question if the USPS has the authority to make that type of change. Businessweek calls the move a risky gambit that could prompt a backlash. Or it could stand as a savvy tactical shift which might “force Congress to get serious about postal reform”.

Writing in the Atlantic Magazine James Fallows weighs in with what he calls the one article you need to read on the subject. (OK, he really wants you to read at least two!)

Fallows sympathizes with the view that Congress has really made a mess of the USPS, though he has to confess that he once worked for the local post office and the expert/author he references, John Tierney, is his brother-in-law. (While listing disclosures, readers may already recall that Fallows is also a news analyst on NPR.)

Tierney’s article in Salon magazine presents a less-heard view that the USPS  is “quite well managed and operates as efficiently and effectively as we have any right to expect”. Tierney isn’t fixated on how many days the mail is delivered. His complaint is that Congressional micro-management is killing the postal service.

Here’s an article that argues the USPS could go to three-days-per-week delivery and things would be just fine. And here’s more background on the postal service’s odd status: the modern version is not entirely a government agency, but not just a business either.

NCPR has reported on the issue of closing small post offices, a topic of particular concern in rural areas. Tierney’s article asserts the accumulation of piecemeal protests to “save our post office” is actually part of the larger problem:

For decades, postal executives, looking ahead at trend lines that portended financial ruin, have tried to take steps that would put the mail system on a more sustainable footing. They’ve tried, for example, to pare down the enormous network of tens of thousands of post offices. But when they try to shut down costly, inefficient little post offices at rural crossroads, the local congressperson rises up in indignation, a defender of the local community’s “heartbeat.”

I have an opinion, you have an opinion. But it seems like there’s some need to look beyond dropping a day, assigning blame, or tinkering with the budget – important as those details are.

The spouse and I were kicking this topic around with a life-long Canadian neighbor the other night: what do nations still need in a postal service? That got sidetracked into a few test questions: When did Canada abandon Saturday mail delivery? That required – what else? – an Internet hunt. Answer: 1969. Maybe Canadians bemoaned the loss at the time. But by now it’s just normal.

And what about postal history in the U.S.? Wasn’t a mail system specified in the Constitution? (More research required!) Well, yes and no. It’s authorized, but not required: Article 1, section 8, clause 7 states Congress has the power “To establish Post Offices and post Roads”.

That suggests the leading minds of the late 1700’s felt a country-wide system of mail delivery was good (necessary?) for a nation’s health. Is that still true today?

Over time, we’ve seen all sorts of efforts to establish basic infrastructure: mail, canals, railroads, public schools, telegraphs, highways, electricity, telephones, airports. These days it’s Internet access in general followed by high-speed Internet access in particular. (This is not a complete list and it co-mingles “hard” and “soft” infrastructure, but the point is to think about the things that help nations thrive.)

Private courier services have been around for a while now (UPS dates back to 1907). They’ve proven to be nimble, efficient competitors that provide a valuable service. We’ve all heard arguments that email and private enterprise can replace conventional postal services.

The Internet is not available everywhere. The Internet cannot do everything, especially in the physical realm. Not everyone chooses to use it either. There are still plenty of places where nothing would get delivered – if it weren’t for postal services.

There may be efficiencies that should be adopted. Change is often painful. But I would argue that this somewhat unfashionable institution still contributes to national health.

A minor hobby of mine is ogling mail order nurseries. One such site, the Golden Bough Tree Farm, has this to say about mail systems, which I will quote because I share the sentiment:

Parcel Post works well: bundles of our trees find their way on time and with equal accuracy to Badger, Nfld. & Horsefly, B.C., real places that courier services won’t serve or can’t find. The Canadian Postal Service is a creation of generations of our people. Its network knits together our tenuous ribbon of a country… and woe, implacable woe on those who dare to unknot it, either from within or without.

Do people have a right to decline new technology and still be served as they were prior to the Internet? Does a physical delivery service provide redundancy we need, should some cyber attack (or who knows what) interrupt the flow of electrons? Should remote areas get a special pass to keep their post office open, even if that is an economic drain?

It’s OK if you only want to look at Saturday delivery. At your own town’s post office. Or how to keep the USPS from going broke.

But I am very curious if anyone is thinking in terms of re-inventing this wheel so it fits into “now” – and serves future needs. That could mean tossing out a few sacred cows along the way.

Do you think you have a good national postal service today – be that the USPS or Canada Post?

Do we still need one?