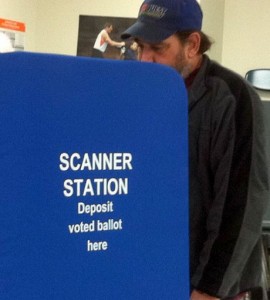 Election day may be months away (it’s Tuesday, Nov. 5, this year), but county officials are already planning. In Franklin County, the Adirondack Daily Enterprise reports today that county election commissioners are worried a new federal law could require them to make voting available for 15 days before Election Day.

To be clear, the federal law they’re worried about isn’t actually law yet — it’s just under consideration. In fact, it’s barely that, it seems. I wasn’t clear on which law officials were concerned about, so I got in touch with the author of this article who says she believes it’s the SIMPLE Voting Act, H.R. 6591. On GovTrack.us, a site that tracks legislation in the US Congress and state legislatures, the bill is listed as “died (referred to committee),”as of Nov. 15, 2012. There’s also a bill in the house from Rep. John Lewis (Sen. Kirsten Gillibrand’s also involved in this one) that’s in committee in Congress. GovTrack is predicting that bill, H.R. 12, has a zero percent chance of being enacted (this is based in part on the fact that so few bills make it past committee and get enacted annually.

So the possibility of this particular bill becoming law seems a bit remote at this point. But after the difficulties many in Florida faced with early voting during the last election, and the lawsuit currently pending against the state in federal court, reform of early voting (and absentee balloting) does seem to be a good possibility.

Planning for that eventuality is on county officials’ minds, and county Election Commissioners Kelly Cox and Veronica King said at a county board meeting last week that it could present real problems.

Here’s the idea: If early voting becomes federal law, it will mean that voting sites will have to be open for some period (likely, up to 15 days) before “official” Election Day. And if that happens, it will not only require some extra preparation by the county (which will cost money as some materials will need to be updated), but will also be expensive for the county in an ongoing way. The county will have to staff polling places, and King said the Franklin County just doesn’t have the money. Commissioners asked county legislators to send a letter to state and federal officials opposing the law.

County Board Chair David “Billy” Jones invoked a phrase guaranteed to get any cost-conscious New York state resident’s back up to describe the possibility: “It smells like another unfunded mandate to me, a little bit.”